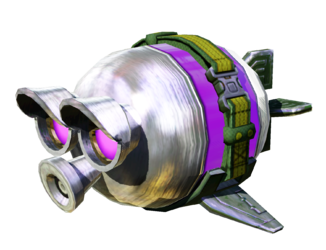 Octorpedoes are missile-like Octarians that resemble Octopods and are fired as projectiles by certain bosses in Octo Valley, Octo Canyon, the Octo Expansion, and Return of the Mammalians. Unlike Octomissiles, Octorpedoes home in on their target instead of just moving in a straight line. Once they come into contact with any surface or the player (or after flying for too long), they explode in ink. They can be splatted by being hit with ink, and take very little damage to splat.

In Octo Valley, Octorpedoes appear in Enter the Octobot King!, in which DJ Octavio fires them out of four holes on the front of his Octobot King throughout the battle. He can shoot up to four at once.

In Return of the Mammalians, Mr. Grizz fires Octorpedoes at the player in the Rocket Battle.