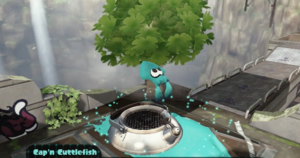 The kettle for this mission is to the left of Cap'n Cuttlefish along the path on the first corner in Area 1.

First, hit the launchpad immediately in front of you with

You will face three Octotroopers: one on top of a box and two guarding behind. The light brown boxes do not contain anything, but the darker-colored ones with a white label contain Power Eggs.

After defeating the Octotroopers by shooting with

, grab all the Power Eggs around. These can be obtained by walking close to them or shooting them. There is also a hidden Power Egg box behind the ramp.

Swim up the ramp by covering it with ink and transforming into squid form. 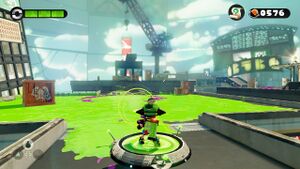 The Octotrooper in front of you has front-facing armor. To defeat it, you must shoot it in the back. This can be done by swimming around and shooting it from behind, or by distracting it with a Splat Bomb or other sub weapon so it faces the bomb and exposes its rear to you, then shooting it. After defeating it, grab the Power Eggs and smash the boxes. Launch to the next checkpoint. 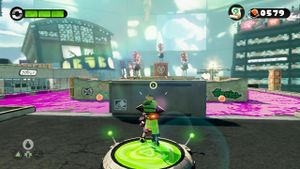 You are faced with an arena and three Octotroopers on top of boxes. From your starting point, make a trail of ink by shooting out from the shelter. You can use a Splat Bomb to distract the Octotroopers, but they will not see you as you swim through the ink. Get behind or to the side of the enemies for an easy win. Note that when one is splatted, the others will be alerted, so act fast.

Clean up the field by grabbing all Eggs surrounding the arena and destroying the red boxes, then launch. 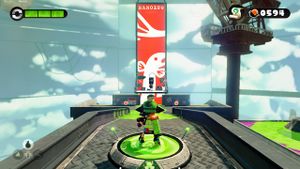 Fill in the ink trail already left for you, then swim down to a barricade to collect one Power Egg. Remember you can shoot to the other side to get the other Power Egg.

Like with Checkpoint 1, you need to distract the Octotrooper with a bomb so that it turns around, then shoot its back. Splatting the enemy reveals the launchpad. 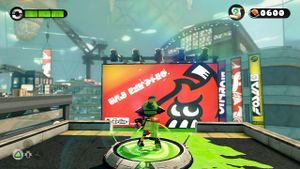 Make a trail down to the first barricade, then shoot out to get the other two Power Eggs from the barricade. As with the previous checkpoint, use a bomb to distract the two Octotroopers, then shoot them in the back. Defeating both reveals the launchpad. There are no other collectibles so launch to the next checkpoint. 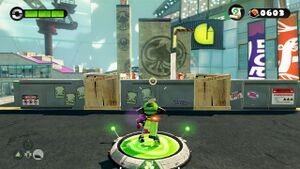 Six Octotroopers are circling three pillars, two per pillar. Swim around the pillars and splat all of the enemies, making sure to hide behind the first pillar if you get hurt. Then burst the remaining boxes. After all the Octotroopers are splatted, a launchpad will appear.

On top of the third, tallest pillar is the Sunken Scroll for the mission. After getting the Scroll, Super Jump with the launchpad.

At the top of the ramp is four Octotroopers guarding a key. Remember that they lose your position when you dive into ink. Use bombs to distract them or simply shoot them all after destroying the boxes. There are two Power Egg boxes on the far right. After splatting them, grab the key by covering the ramp with ink and swimming up.

Go back to the vault with the key and approach it to unlock it. It reveals a Launchpad. 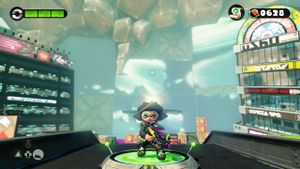 Two Octotroopers are circling the Zapfish. One has front armor, the other does not. Fire down the ramp towards them, collecting the three Power Eggs on the way. As before, distract the one with armor with bombs. After splatting both, destroy all boxes around. The stack of three (two red on top of brown) has the key.

When you approach the vault, three more Octotroopers spawn in. Use a bomb or simply shoot them. Unlock the vault and launch using the unlocked launchpad.

You are thrown to the top of the tower. Destroy the shield by firing at the Zapfish and then touch it to complete the mission. 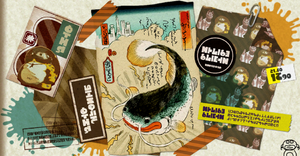 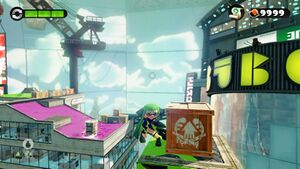 Location: Octotrooper Hideout's Sunken Scroll can be found on top of a pillar after Checkpoint 5. It is located inside a crate, and discusses Inkopolis' power source, Zapfish. It also depicts an image of the Great Zapfish, which has been captured by the Octarians. 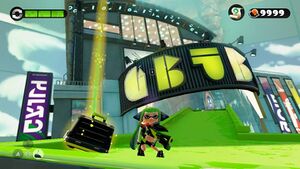 Location: The armor is located in front of Checkpoint 6.