The Kettle for this mission is on a tall tower in the back right corner of Suction-Cup Lookout. To reach it, find a Sponge Block in the back of the area, Ink it, and swim up. Jump to the Grate across from the Sponge, and ink and swim up the tower the grate is hanging from, and then ink and jump to the tower with the Dash Pad. Being launched from the Dash Pad will land you on some Grating, Ink the boxes just above, and find the Kettle.

Go to the end of the inked path, and shoot the Propeller to bring the platform towards you. Board it and shoot it again to align with the stable platform ahead with barriers. Climb up the structure with the help of Grapplinks, and defeat Octotroopers on the way. After the second Grapplink, hit the propeller ahead and board the platform, splatting the Octotrooper if needed. Dodge the Octozeppelins, shoot the second propeller if needed, and board the next platform. Now align the platform with the stable one ahead, splat the Octotrooper if neccesary, dodge the Octozeppelins, and Super Jump with the launchpad on the platform.

Climb up the structure ahead with Grapplinks and splat the Octotroopers if needed. Hitting the second Grapplink will bring you to a platform periodically swept through by Octomissiles. Use the barriers as cover, or splat them by the tentacle on top. The key is in the crates to the left, while the vault locking up the launchpad to the next checkpoint is to the right. To reach the Sunken Scroll, get to the left edge of the platform that is swept near where you land from the Grapplink. You should see a platform with a Ride rail. Jump down to the platform, and activate the Ride rail. There will be three crates and a launchpad that will take you back to the lower area. One of the crates will hold the Sunken Scroll. 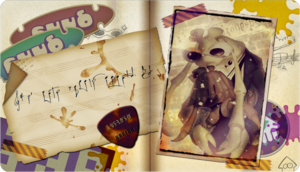 Location: Under the platform where you first encounter the huge wall of Octomissiles aim and blast the ride rail on the small lower platforms, summoning a long trail you can hop down and ride to the area above the rocket dispensers. The scroll is on the ledge in a small orange box; there is a small piece of terrain that you can jump on to access the ledge. 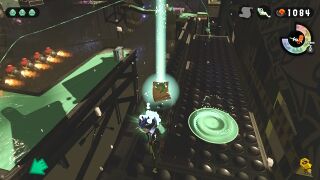 Location: The Sardinium is after the launchpad guarded by a single Octotrooper with a balloon, right near where the second line of Octozeppelins come out their hangar. 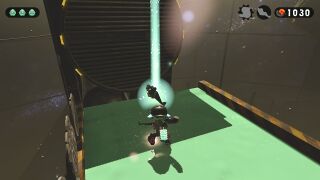 Octozeppelin Invasion has 2 pieces of armor to collect.

Armor 1 Location: The first armor is right where the first line of octozeppelins comes out, close to the start.

Armor 2 Location: This armor piece is located along the edge of the platform closest to the line of Octomissiles, on the right hand side; the Stingray canned weapon is right in front of it.

Sting Ray Location: In front of the second armor, on the platform periodically swept through with Octomissles.

Location: This is an Cash Up Ticket. On the platform with the Octozeppelins that has a propeller on it to lower the platform, first lower it as much as possible and head towards the orange crate near the end of the platform. Turn to face the direction opposite to the spawn. To the right is a small platform underneath the main one along with a small orange crate and an unactivated Ride Rail. Ink the ground and jump for this platform to reach the crate containing the ticket. 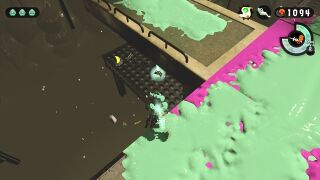