Parking Garage
˜ Drive to the Finish ˜​

Parking Garage
˜ Drive to the Finish ˜ The Kettle for this mission can be found on a platform in the far left corner of Beaker's Depot. To reach it, Ride 2 blocks near the Ride Rail leading to the upper level, to a blocked off platform with 3 Sprinklers. Use a ramp to gain access to a Grapellink you use to get to the platform the kettle is on. Use one final ramp to get to the kettle.

In front are three tall poles with a sprinkler on each. Break them and ink the tallest pole in the middle, break the crate on top and climb up it. If the weapon used cannot reach the top, another pole is placed behind the tallest poll to help the player reach the top. Once at the top, walk along the path, defeating Octotroopers on the way. There are also cars on the path, which the player can jump onto like any other block. The third car has Ink Pistons around it, which will pop out simultaneously and paint the car. At the end of the path there is a Ride rail and the first checkpoint.

Taking the ride rail will put the player into a fight with an Octoling. After defeating the Octoling a launchpad spawns in the far left corner of the area to the next checkpoint.

Climb up the wall with the Dash track to enter a series of platforms around an Octosniper. The player can move cautiously while the Octosniper looks away and take cover from barriers and blocks littered on the platforms, or they can just move quickly through the course. After using the Dash track, take a right turn and use the Dash track ahead to a platform above. Splat the Octotrooper there, then take a left turn and drop off to the next platform below. Defeat the Twintacle Octotrooper there, and drop off to the next platform with a Octotrooper. Continue to move ahead and splat the two Octodivers and take a left turn there. Ahead is a slope upwards, with a Dash track at the other end. Getting on the slope will likely expose the player, so move quickly and take the Dash track to the next checkpoint.

The player will be put into a fight with two Octolings in an area with two sprinklers in the middle and blocks littered around the side. Deafeating the two will spawn a key on a block structure near the final checkpoint. Take the key and drop down the hole to the vault and take the Ride Rail there to the Zapfish. 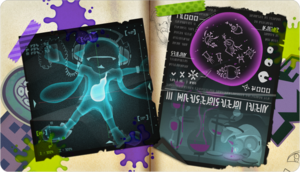 Location: The scroll is under the platform of Checkpoint 3. Drop off to the right onto a block below and the scroll is to the left. 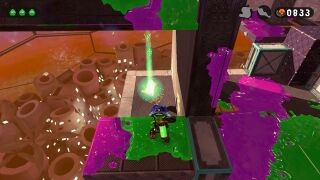 Location: At the final checkpoint, go onto the car with two sets of uninkable blocks next to it. The Sardinium is hiding behind the car with some crates. 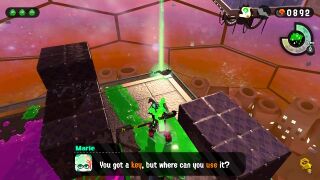 Parking Garage has 3 pieces of armor to collect.

Armor 1 Location: Defeating the second Octotrooper on the second car in the beginning area reveals the armor piece on the car.

Armor 2 Location: After taking the first Dash track of Checkpoint 2, instead of taking a right turn, take a left turn and climb onto the block with the armor on top.

Armor 3 Location: In front of Checkpoint is a lone crate containing the armor.

Ink Storm Location The crate containing the canned Ink Storm is by the handrail near the Final Checkpoint.

Location: Turn right at the sprinkler of checkpoint 4. Climb onto the car and jump onto the uninkable blocks. The crate containing the ticket is on the blocks. 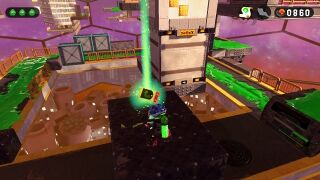