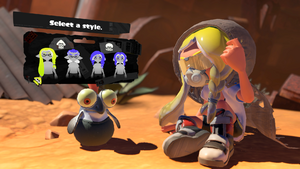 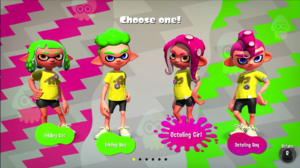 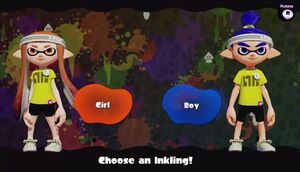 Upon starting the Splatoon games for the first time or selecting Player Settings from the Options menu, the player is given a variety of options to customize their Inkling or Octoling.

In Splatoon, the player has the option to change the following:

Splatoon 2 added the ability to change the player character's hairstyle and legwear, as well as additional options for eye color. Four new options for hairstyle and four for legwear, two for each gender, were added in Version 2.0.0. Hairstyles and legwear can also be changed in the Equip screen. The Octo Expansion added the ability to play as an Octoling after beating the campaign. The introduction of the Splatfest team names in Version 4.0.0 also revealed official names for the different hairstyles for the first time in the Splatoon series.

In Splatoon 3, gender and species are collectively referred to as styles. Gender locks on existing customization features are removed, now allowing both styles of the same species to access any hairstyle and legwear. Inklings have 16 available hairstyles, while Octolings have 8. More customization options are added, including customizing the hairstyle of the player's Smallfry buddy whom has 7 available styles. This game also allows the player to play as both Inklings and Octolings from the beginning of the game.

The player customization screen in the Octo Expansion.