From Inkipedia, the Splatoon wiki
(Redirected from Prohibited area)
Jump to navigation Jump to search 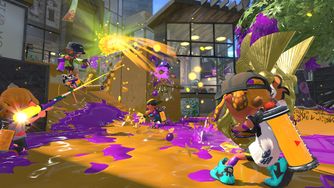 This article is about the Ranked Battle mode. For the weapon of the same name, see Rainmaker (weapon). For the shield that must be burst to obtain it, see Rainmaker shield.

Rainmaker was first announced in the Splatoon Direct on 7 May 2015. However, its description was extremely vague and only a picture of the Rainmaker itself was released. The weapon was later shown in action in a Japanese Splatoon commercial that was released in late July 2015. Rainmaker was released on 15 August 2015 at 02:00 UTC.[1]

Clips of Rainmaker from Splatoon 2.

Rainmaker was first confirmed to return for Splatoon 2 on 2 June 2017 in a Nintendo YouTube video.[2]

The Rainmaker was changed to fire an exploding ball of ink rather than an ink tornado. A modified Rainmaker that has significantly more range and does not explode after carrying it for too long is given by Sheldon during the final phase of the final boss in Octo Canyon.

Rainmaker appears as a type of test that Agent 8 must pass to escape the Deepsea Metro; the Rainmaker has the Kamabo Corporation logo on it instead of the anchor logo of the standard ranked mode. The mode works the same as a regular Rainmaker match but Agent 8 is up against a team of four Sanitized Octolings. The Rainmaker appears on Agent 8's pedestal and they have to carry it through the enemy's base by themselves and get it on their Rainmaker pedestal.

Unlike in multiplayer, the Rainmaker can be carried anywhere in the stage and does not automatically splat the user if held onto for too long. Additionally, the Sanitized Octolings do not attempt to take the Rainmaker themselves - if they break the Rainmaker's barrier, it is reset to its start point. 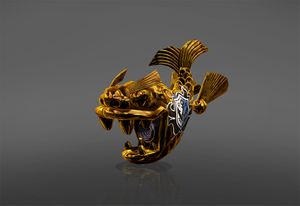 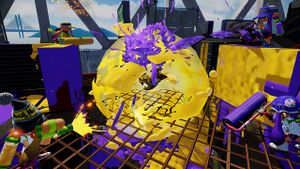 Rainmaker on Hammerhead Bridge, covered in a bubble shield.

Rainmaker is similar to Tower Control in that it requires teams to move a certain object to a point in the other team's base. However, in Rainmaker, only one player may have control of the Rainmaker and they control where it goes. The device is encased in a shield similar to a Zapfish's bubble and must be freed before it can be picked up. If one team bursts the Rainmaker shield, all players of the other team caught in the blast radius are instantly splatted. The Rainmaker can then be picked up by either team. Touching an intact shield causes a small amount of damage.

Effects of holding the Rainmaker

After picking up the Rainmaker, it has some effects on the carrier:

The Rainmaker itself is capable of shooting large twisters of ink, similarly to an Inkzooka (in Splatoon), or bursts of ink (in Splatoon 2). The Rainmaker has similar attributes to a charger-class weapon, due to it having a charge mechanic. The shots that it can fire range from a small twister or burst to a large tornado-like twister or big, explosive burst depending on the length of time that

is held down by the player. At maximum charge, the shot is lethal, allowing the Rainmaker carrier to have a form of defense against enemy fire. The projectile in Splatoon 2 is fired in an arc, allowing its shots to hit enemies behind cover but making it much less effective in close quarters.

The Rainmaker carrier should note that shots from the Rainmaker do not consume ink, and therefore they do not need to consider refilling their ink tank when defending or attacking.

Effects on the carrier

The player holding it cannot Super Jump, enter any spawn point, nor can they use any of their main, sub or special weapons. Because the Rainmaker is so heavy, the player's movement speed and swim speed are reduced by 20%, and speed-increasing abilities affect the player normally no matter what weapon they were carrying prior. The special gauge does not charge while carrying it. If it is dropped, the Rainmaker shield reforms around it. It can then be recaptured by any player on both teams.

The player holding the Rainmaker has the Ranked Battle symbol marking them for everyone to see above their head alongside the sixty-seconds explosion timer, making them a huge target. The symbol can be seen on the map and even through walls when the player is in humanoid form.

When swimming in ink in squid or octopus form, the Ranked Battle symbol disappears for the enemy team, making it more difficult to spot the Rainmaker, but an additional glow is added where the carrier swims.

Overtime does not begin when:

Prohibited areas, or Rainmaker-Free Zones, are areas that are harder for the enemy team to reach. They were introduced in version 2.4.0 of Splatoon. They appear in certain stages and are indicated with a Rainmaker-Free signpost by their entrance. When the Rainmaker carrier enters the prohibited area on their side of the stage, they get a penalty as the Rainmaker explosion timer ticks faster, just like when retreating with the Rainmaker.