Propeller-Lift Playground
Whispers on the Wind​

Propeller-Lift Playground
Whispers on the Wind Propeller-Lift Playground is the sixth mission in Splatoon's single-player mode, Octo Valley. It gets its name from its heavy use of propellers.

After the player clears The Mighty Octostomp!, they gain access to Area 2 via an Inkrail. Turn left and walk toward the middle and largest pillar and shoot the invisible kettle on top of it to access the level.

Walk forward until you reach the grated floor and shoot the four Octopods below. Then, the player will be met with three Octopods above a ramp which will proceed down toward the player. After swimming up the ramp, the player will see two Octopods past the ramp. There will be a propeller past them which the player can shoot to proceed forward to the first checkpoint.

There will be another ramp and two small walls with two Twintacle Octotroopers which can be disposed of quickly as they move side to side in their pool of ink. Then the player will have to ride the platform, shoot the wall, and swim up it to the next launchpad and the next checkpoint.

There will be a forward-moving propeller platform where the player will pass by an Octocopter. At the end of that platform's travel, there is an Octotrooper on a small pillar and a Twintacle Octrooper circling it. The next platform has the same except with two Octocopters on the way and a Shielded Octrotrooper with a Twintacle Octotrooper which need to be defeated to unlock the launchpad. This sends you to the final checkpoint.

The player will need to shoot at propellers to make a cube descend then shoot and swim up a wall. There will be a small wall and a cube with a propeller on the front to move it towards you with a Twintacle Octotrooper on top. Move forward to another cube, similar to the first one, with two Octotroopers on top of it. Move forward to another platform to rise to the top and reach the Zapfish. 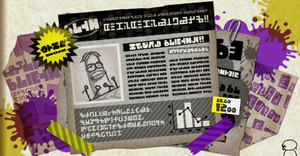 Location: After the second checkpoint and the Twintacle Octotroopers is a large propeller platform which, after shooting the propeller, leads to a secret area below it with the Sunken Scroll and a launchpad to return up.