From Inkipedia, the Splatoon wiki
(Redirected from Propeller lift)
Jump to navigation Jump to search 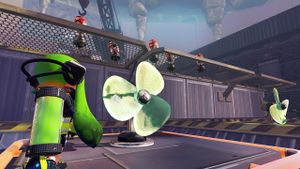 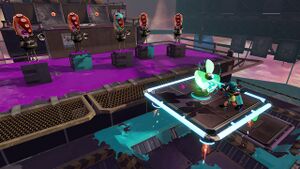 Propellers were introduced in level 6 of Octo Valley, Propeller-Lift Playground. Propeller lifts similar to the ones used in Octo Valley can be found in the stage Ancho-V Games, as well.

Propellers appear similar to fan blades attached to a central axis and stand. They can be found on movable platforms throughout Octo Valley and Octo Canyon, and can be found on the multiplayer maps such as Salmonid Smokeyard, Marooners Bay, and Ancho-V Games.

When sprayed with ink, propellers begin to spin and the platforms they are stationed on start to move in a designated direction. The sides of the lift lights up in the player's color ink. Propellers can only be operated by a constant stream of ink, as a halt in this stream causes them to slowly move backwards.

The propellers found in Ancho-V Games function similarly to the ones found in Octo Valley, the main differences being that they can only be activated from the front and the back, and they also shoot ink out from the top in the player's color. This may also splat any opponents.

Propellers make a return in Octo Canyon mode in Splatoon 2. Functionality is the same except this time platforms are linked to a dotted line showing where the platform (more specifically, the propeller) goes.

Propeller lifts can also be found in the Salmon Run maps, Marooner's Bay and Salmonid Smokeyard. They can be used to quickly get to the central egg basket from the shoreline. Additionally, the stage Ancho-V Games returns, with additional propeller platforms added on the side routes.

Propellers now face in the direction they will go. This does not include corners and curves in the route.