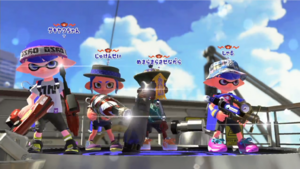 Team of top 500 players in Rank X with their crown icons, shown before battle in Splatoon 2.

Players who have ranked up to Rank X battle for X Power rather than the Rank Meter. Players with similar X Power levels are matched together within Rank X.

On SplatNet 2, players can check X Power, most used weapon within the last 50 matches and estimate position within top 2,000 for each mode. They can also see the top player and the top player with their weapon.

After every month, for each of the four different Ranked Battle modes, 500 players with the highest X Power are announced on SplatNet 2.

X Power resets after every month. Players whose X Power ended up lower than 2,000 rank down to S+9. If X Power drops far enough that they lose after their power is lower than 1,900, players may rank down to S+9 on the spot rather than at the time of the reset.[1][2]

Before every ranking period, stages roster for each of the 4 different Ranked Battle modes are announced on social media.

Each Ranking period starts at the beginning of the month at 00:00 UTC with X Power reset.

After each period, X Rank leaderboard of the top 500 players in each of the 4 different Ranked Battle Modes is announced on SplatNet 2.

Change in weapon and stage additions

New weapons were added approximately once a week, with a ranking period of a month, while a batch of several weapons was added once a month.

Furthermore, stage additions or revamps were more likely to debut once a month at the time of the monthly reset.

The Ranked Battle stage roster is limited to eight per Ranked Battle mode. Then, at the monthly X Power reset, the stage selection refreshes to a different set of eight.