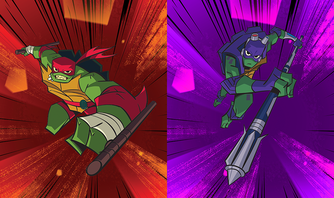 Raph vs. Donnie was the final round in a three-round tournament. The winner of the first round and the winner of the second round faced off in this event. The theme of the tournament was the four main characters of the television show Rise of the Teenage Mutant Ninja Turtles: Leonardo ("Leo"), Raphael ("Raph"), Donatello ("Donnie"), and Michelangelo ("Mikey").

While there are normally several weeks between Splatfest events, the Rise of the Teenage Mutant Ninja Turtles tournament's events were only one week apart.

The full name of each choice was "RAPH" and "DONNIE". The team name portion of Splatfest titles was "Raph" and "Donnie".