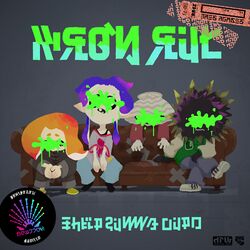 Sandy Side Up is a song performed by Front Roe.

Sandy Side Up is a blend of rock and electronic music, a style similar to that of the Squid Squad, Front Roe's predecessor. It starts with a short bass and drum intro that sounds similar to the beginning of Kinetosis, then an electric guitar, with all of the instruments joining later. The electric guitar becomes the main instrument during this instrumental part. Voices resembling those of Quinn and Mashup from Diss-Pair start singing, followed by Ichiya singing a verse. The Quinn and Mashup-like voices then sing short sentences followed by Ichiya singing more longer verses, and after three times, the song loops.

In Splatoon 3, it has a random chance of playing in a multiplayer battle.