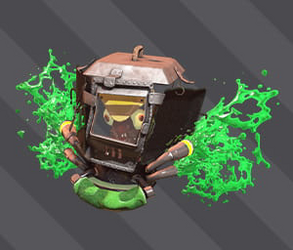 Scrappers move slowly, but leave behind a large trail of ink. The only way to splat a Scrapper is to shoot its tail, which is located behind it. Shooting anywhere else will do no damage, but doing this enough will stun the Scrapper. Players should use this time to splat the Scrapper. If one player shoots the Scrapper, it will stop moving and face its shield against this player, making other players able to attack from behind.

Splatting Scrappers a specific number of times in Salmon Run: Next Wave will reward the player with special badges that they can use on their Splashtag.