Secret Bowling Alley is the sixteenth mission in Octo Canyon. It is the first level to introduce the Octoballers.

The Kettle for this mission is at the front left of Slimeskin Garrison. To reach it, find a Bounce Pad to the left front of the area, and use it to get to an Inkfurler, leading upwards to the kettle.

Immediately to the left are two lanes of Octoballers rolling. The player will have to move up and against the Octoballers. Take advantage of the period of vacancy when the Octoballers aren't rolling to cross and navigate the path. To the far left is a safe platform to wait out, and then further ahead is a grating above which provides safe ground below. From there the player has to climb up to the grate and dodge the Octoballers to reach the path branching off to the left, where sits the first checkpoint.

Ahead on the path is a platform rolled over by two lanes of Octoballers. Time and climb up the platform and navigate through the lanes. The first part has nothing but a grating at the end, the second part has a lone Octotrooper under the grating, and the third part has another lone Octotrooper in front of the launchers, with a platform to the right with the launchpad to the next checkpoint.

Ahead is an uninkable platform with one lane of Octoballers through the middle of the platform rolling towards the left. On the other end are two Twintacle Octotroopers guarding the next platform. Defeat them and cross the platform, then climb up the next platform. There is the same uninkable platform but with two Octoballer lanes through the middle rolling to the left, and an Octosniper at the other end guarding the Gusher. Defeat the Octosniper, cross the platform, use the Gusher and get to the launchpad ahead to the next checkpoint.

Ahead is a lane of Kingpin Octoballers. These are large versions of Octoballers. Climb up to the grating ahead and break the crates to the right. Use the Ink Cannon there and shoot the glass window of the Kingpin Octoballers to destroy it. That will provide enough time for the player to cross the lane and climb up the block to the left with the final checkpoint. Alternatively, move quickly and bypass the Ink Cannon shooting part and even the crate-breaking part.

Use the Gusher ahead to climb up the block to view the next section. Ahead are three lanes of Octoballers with moving platforms moving side-to-side to alter their paths. Drop off and cross the first moving platform to climb onto the platform ahead. On top is a Gusher to block Octoballers and to climb up to the second moving block ahead. From there the player has to move to the three Gushers on the other end, which can block all Octoballers if all are activated while dodging shots from an Octocopter above. Use the Gushers to get up to the platform with the Zapfish. 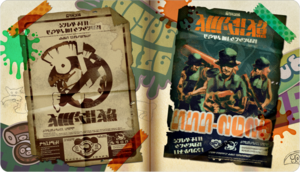 Location: At Checkpoint 4, instead of climbing the wall to the left, continue on the lane and get to the path branching to the right at the other end. The path connects the lane to a block with the crate containing the Scroll on top. Shooting the Kingpin Octoballer is necessary to have enough time to reach there. 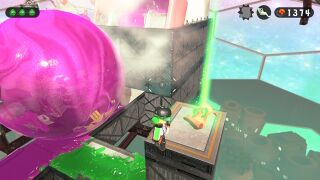 Location: At Checkpoint 2, the third and last lane of Octoballers has a grating stuck to the end. Drop down from there to a platform below with the Sardinium. 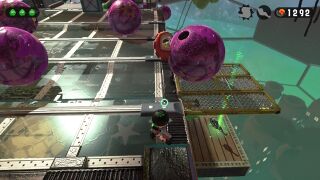 Secret Bowling Alley has 2 pieces of armor to collect.

Armor 1 Location: In a crate immediately in front of Checkpoint 1. Be aware that staying there may cause the player to be crushed by Octoballers ahead.

Armor 2 Location: In the open to the close left corner on the second moving platform.