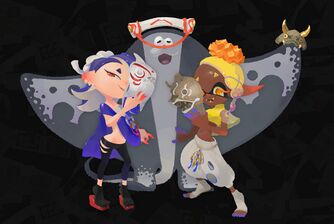 疾風怒涛カチコンドル (unofficially translated as Raid Under Storm and Stress) is a song performed by Deep Cut.

Raid Under Storm and Stress is an energetic pop song. It starts with an instrumental intro, in which Shiver sings several notes near the end of it, immediately followed by her performing a verse. After that, a short instrumental riff plays, with Frye signing a few notes before transitioning to Frye doing a rap verse. Following the rap is the chorus, which is performed together by Shiver and Frye. Afterwards, a bridge including instrumental and Shiver's vocals is used to transition back to the beginning of the intro for a new loop.

This song plays during two of the missions in Alterna Space Center. Like in many other missions, when the player has been spotted by enemies, an additional percussion track is layered on top of the music.

Raid Under Storm and Stress (Live)

During the Deep Cut Concert at Nintendo Live 2022, an extended version of the song structured like J-pop music is performed. The audio mixing of this live performance emphasizes the bass guitar much more prominently than the in-game version. It starts out roughly the same in the first loop, except for two vocal notes added to the beginning of the intro. Afterwards, instead of looping back to the intro at the end of the bridge, it jumps to Frye's rap verse and continues normally to the chorus a second time. During this chorus, Big Man joins Shiver and Frye in the vocals. This is followed by a bridge consisting of a new 8-bar instrumental riff, then two repeats of the instrumental riff before the rap section. The song then goes back to the chorus again with Big Man's vocals included, then once more but transposed up by half a semitone to E-flat minor. It then finishes with a proper ending based off the instrumental intro transposed to E-flat minor.