Shiver is a character in Splatoon 3 and one of the three members of the band Deep Cut, alongside Frye and Big Man, with whom she co-hosts both Anarchy Splatcast, the news show of Splatsville, and Splatfests. She is also the third reachable boss of Return of the Mammalians. Her signature color is blue.

Her voice actress is currently unknown.

Shiver is an Octoling with pale skin and a wide, oval-shaped face, with slender eyes under sharp blue triangle eyebrows. Her irises are red, with light red pupils in the shape of an infinity symbol, similar to Marina's pupils, (and matching octopuses in real life). Her Octoling eye mask is thin and sharp, almost appearing to be cat-eyeliner makeup, with red eye shadow blended underneath.

Shiver's tentacles are shoulder length, with the left side styled over her face, hiding her left eye from view. Her tentacles have a slight gradient from a light blue to navy blue, and are curled upwards slightly at the ends. In addition to the eye makeup, Shiver also appears to be wearing a light red lip gloss.

Shiver has a cool, yet rebellious sense of fashion, with a clear root in traditional Japanese culture. She wears a white sarashi chest wrap, under a long purple shawl made from a shiny translucent material. Attached to the left side of the shawl is a large silver octopus charm with two red tassels tied through holes in the ornament. On her legs are low-cut black leggings decorated with two slashes on her right thigh, resembling shark gills. She wears black tabi-like shoes with red wedge heels. Additionally, Shiver's fingertips are dyed a bright red color. Her right ear is pierced with three shark tooth-shaped earrings. On the back of her head, circling a large suction cup on one of her tentacles, is a length of white twisted cloth tied in a knot; not unlike the traditional Japanese hachimaki headband. Hachimaki have a variety of styles, and the one worn by Shiver in particular is a common sight during certain Japanese festivals.

During the Anarchy Splatcast and Splatfest performances, Shiver can be seen holding a white sensu fan, painted with her family crest in blue which many think the bottom half resembles the marbling of fat in salmon. In Alterna, she also wears a shark mask, which takes inspiration from Japanese kitsune masks with it's characteristic red and white design.

During Splatfests, any part of Shiver's appearance that is normally blue changes to match the color of her Splatfest team, with the exception of her fingertips, her tongue, her wedge heels, and her octopus charm tassels; which are instead painted with a color directly opposite of her Splatfest team. 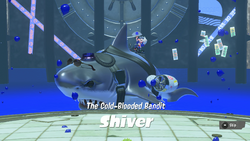 Shiver and the rest of Deep Cut are initially hostile to Agent 3 and the New Squidbeak Splatoon, declaring that all treasure in Alterna is theirs to plunder and that they will not let anyone else have it. Later, when the New Squidbeak Splatoon team agrees to give Deep Cut the treasure (after using it to remove Fuzzy Ooze), they decide to become the player's ally and help them in defeating Mr. Grizz. Shiver briefly lends her pet shark Master Mega to the player, to help give them boost into outer space.

Main article: The Pursuit of the Precious.

Shiver is the third boss of the single-player campaign, Return of the Mammalians, and the second Deep Cut boss. Her boss kettle is found on the Landfill Dreamland Site.

When Shiver was first revealed in the Splatoon 3 Direct, neither the presentation nor any promotional material (such as the announcement dialogue for the Splatoon 3 Splatfest World Premiere and references to Deep Cut on the official website) specifically referred to Shiver's gender. This was consistent across all languages, and dialogue in languages that are heavily gendered (French, Italian, and Spanish) did not refer to Shiver in ways that would require inflecting adjectives or verbs for gender. This did not apply to Shiver's bandmates Frye and Big Man, who were referred to explicitly as female and male, respectively.

When referring to herself, Shiver's dialogue used plural forms, as part of the group, or used the passive voice. The Japanese text did not have Shiver use any common first-person pronouns that traditionally connote gender (such as atashi or boku). In the Direct, Shiver used the pronouns "uchi"[1] (an informal pronoun usually used by younger women, especially in Kansai dialects) and "onore"[2] (an archaic pronoun used poetically meaning "oneself" or "yourself"). In game, "onore" was used only in one occasion, in which Shiver talks about a general "oneself", rather than using the pronoun for herself. These pronouns may be portraying Shiver's Kansai dialect through the use of yakuwarigo ("role language"). Most official social media posts referring to Shiver also made no mention of her gender, except for one Nintendo Portugal message that used "pela", implying Shiver to be female.[3]

In contrast, Shiver's bandmates Big Man and Frye at reveal were referred to with terms connoting male and female grammatical gender. For example, Frye introduces herself in French as "the queen of eels",[4] Spanish as the "[female] marine choreographer",[5] and she uses a feminine definite article in her Portuguese introduction.[6]

This resulted in speculation about Shiver's gender and the possibility of her being non-binary or ambiguously gendered. However, official sources such as interviews with Nintendo of America executives[7] and the media's preview game access[8] soon clarified that Shiver is female and is referred to using the pronouns "she" and "her" in-game.

"Shivering" refers to the reaction of shaking in response to cold or fear, in contrast to Frye's name, which suggests heat and warmth. A "shiver" is also one of the collective terms for a group of sharks.

Fūka is a common Japanese female given name, usually written with kanji 風花 (wind-flower) or 風香 (wind-scent). It is also a pun on 鱶 fuka (with a short u), the Japanese word for "shark". This relates to Shiver being descended from a lineage of shark trainers.[13]

Introduction in other languages