From Inkipedia, the Splatoon wiki
(Redirected from Shooting range)
Jump to navigation Jump to search

The Shooting Range is meant for testing of various weapons and abilities, by providing exact measurements that are not available in normal conditions. It contains squid-shaped target dummies, known as Squid Bumpers, that display exact damage amounts when hit, lines of the floor for distance measurements, etc.

In both games, it can be accessed through Ammo Knights or through the equipment screen, by choosing the "Test" option, namely pressing

. If the shooting range is accessed from Ammo Knights, all weapons unlocked by the player are available (via leveling, or in Splatoon, via Sunken Scrolls). When accessing from the equipment menu, only the weapons already bought by the player will be available. 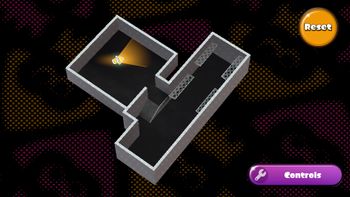 The second area features nine bumpers. Three of them are regular bumpers, three have one, two, or three mains of Defense Up abilities respectively (though they still have 100 health points), as indicated by the number of Defense Up stickers on the front, and the back three are larger and much more durable, taking 500 points of damage to destroy. On the right wall is a basketball hoop.

To the left of the spawn point, there is an inaccessible room with a dark grey nonfunctional door and a long window. Judging by the contents of the room, it is Sheldon's workshop. Inside the room is a pair of tables with green grids on them, an unknown light source, a staircase that presumably leads to Ammo Knights, and multiple smaller objects. These objects include five cardboard boxes, four purple suction bombs (two of which are stuck on walls), a tan pegboard with multiple tools on it, two Splat Rollers with their original design from Splatoon, two E-liter 3Ks (one partially disassembled), an empty Splat Bomb canister, a Slosher, a pair of wingtips similar to the Smoky Wingtips but purple, and small unlit light fixture. The door to the staircase leading to this room can be seen in the background of Ammo Knights.

The testing area will return in Splatoon 3. It will also be assessable during matchmaking, and you can see the Ghosts of other players during that time.

Ramps and platforms are present, and both regular and big Squid Bumpers will be available to practice on. There is also a copy machine, which will let the player battle against AI.