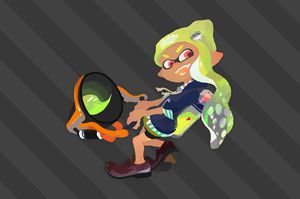 An Inkling wielding a Slosher.

Sloshers are one of the main weapon classifications in the Splatoon series. These bucket-like weapons hurl ink straight ahead at a long range and can be used to splat opponents high up or on the other side of an obstacle.

The first weapon in this class, the Slosher, was released in Version 2.0.0 of Splatoon on 6 August 2015.