The Snipewriter 5H is an upcoming main weapon in Splatoon 3, created by the weapon brand Nouveau.

The Snipewriter 5H is designed to look like an eraser pencil held in a drawing compass. A window cut into its side facing the user shows its internals are shaped like the points of a stacking-point pencil. 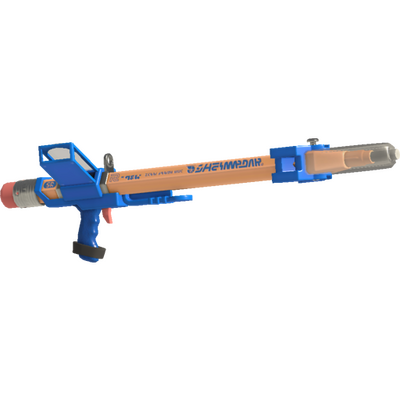 The Snipewriter 5H has a Sprinkler and the Tacticooler for its set. When is held, up to five charges of hardened ink are stored, which can be released in rapid succession by releasing the button. Each shot's power is low, making it more suited for suppression and support roles. Its range is comparable to that of the E-liter 4k, and it charges at about the same speed as the Splat Charger. It also does not have a charge hold. It was added along with Chill Season 2022 on 1 December 2022.

Reaching certain Freshness levels with the Snipewriter 5H will reward the player with special badges that they can use on their Splashtag.

The weapon's name is a portmanteau composed of the words "snipe" (as in "sniper") and "writer" (one who may use a pencil). It is also a play on the word "typewriter". "5H" refers to pencil grading, signifying a very hard graphite, and also is likely short for "5 hits", the number of shots the weapon can store.