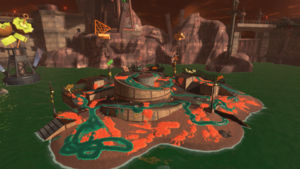 The following directions apply when standing in the same location and facing the same way as the player looks when they Super Jump off the helicopter. The egg basket is on top of a circular raised platform, and going forward is a spiraling tower with raised platforms opposite of it, to the player's right. Past that is a smooth open area, where the ground meets the water. To the left is a small, staggered platform, before the ground meets the water. Behind and to the right is a fence, followed by a drop into the water. There are multiple Gushers all over the stage, where Goldies will come out of during the Goldie Seeking Known Occurrence; Mudmouths can also spawn from them during Mudmouth Eruptions. Sockeye Station also features both high and low tides as well.

Reaching to certain ranks during a Sockeye Station rotation in Splatoon 3 will reward the player with special badges that they can use on their Splashtag.