Spinning Spreaders is the eighteenth mission in Splatoon's single-player mode, Octo Valley. It gets its name from its heavy use of Spreaders.

When reaching Area 4, fall down the large pit, behind Agent 3 is more platform. That is where the kettle is to Mission 18.

The first part of this area is getting across a series of platforms. You are now faced with four Octocopters and three Spreaders. Taking out the Octocopters will make getting across the area a lot easier. But ride one of the ends of the longest Spreader that will take you to a far-off platform containing the mission's Sunken Scroll. Once you collect it, use the Launchpad to return to the main route. When you do ink the steep slope with a short Spreader at the right area to easily get to the top and splat the Twintacle Octotrooper before getting to the Launchpad towards the next Checkpoint.

There is now a large one-bar Spreader inking a large platform with a lone Twintacle Octotrooper. Take it out and drop down to a platform below and cross the tri-bar Spreader to reach the next Checkpoint.

When you climb up a narrow wall, there is a four-bar Spreader with two Twintacle Octotroopers positioned on two of its ends. One of them has the Key to the Vault of the far platform. Splat both of them and grab the Key and open the Vault containing the Launchpad leading to the final Checkpoint. 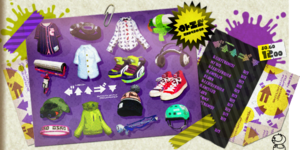 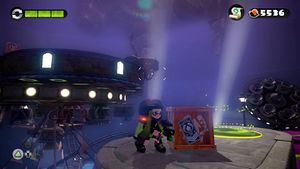 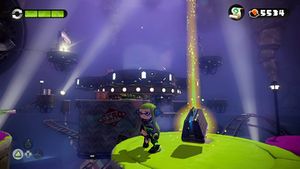 Location of Armor 1: This set of Armor is located on a small cylindrical platform to the right of the first Checkpoint. 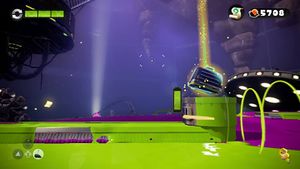 Location of Armor 2: This set of Armor is located on the Spreader in front of the Vault at the final Checkpoint. 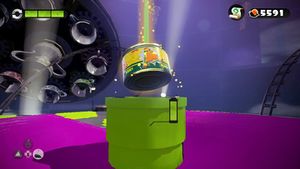 Location: The Canned Bomb Rush is in a crate on top of the axle of the Spreader to the right of the Vault at the final Checkpoint.