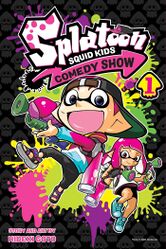 Splatoon: Squid Kids Comedy Show is a manga made by Hideki Goto.

It is published in CoroCoro Comic monthly magazines and collected later in volumes.[1] The volumes got translated to English by VIZ Media and to French by Soleil Manga.

The manga is based on Splatoon 2, featuring a pink male Inkling named Hit as the main character. He wears the Takoroka Visor, Takoroka Windcrusher, and Neon Delta Straps, and uses the Splattershot. He has a buzz-cut hairstyle and dark blue eyes. A pink female Inkling named Maika appears alongside him, wearing the King Flip Mesh, White King Tank, and Mint Dakroniks, and uses the Splat Dualies. She sports the "haircut" hairstyle and has pink eyes. Both characters' appearances are based on the Inklings used in promotional screenshots for Splatoon 2.

The manga features four-panel gags, where Hit usually does something absurd to which Maika reacts and scolds him for it. Another Inkling called Kou appears later in the series. He sports the bowl cut hairstyle and uses the Undercover Brella.

The issue of the manga that appeared in CoroCoro's August 2018 began its focus on the Octo Expansion, with Agent 8 appearing as a male Octoling with pink ink and orange eyes.