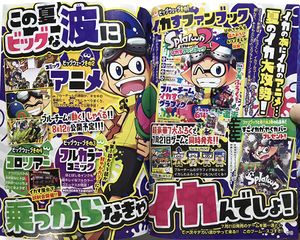 Splatoon (anime) is an anime series on YouTube. It was released on 11 August 2017.

The anime was announced by Sankichi Hinodeya, the creator of the Splatoon manga, on his Twitter account. It is in effect a colored and voiced-over version of the manga, with the occasional addition of animation in some sections. The episodes are available to be viewed on Corocoro's official Youtube channel, but are restricted to Japanense viewers.