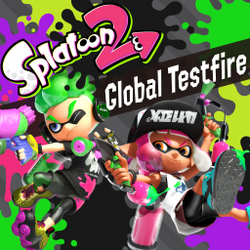 The Splatoon 2 Global Testfire was a free Splatoon 2 demo available on the Nintendo eShop and was the successor to the Splatoon Global Testfire. It allowed players to engage in free four-versus-four Turf War at scheduled times ahead of the release of the game. It was available for download as early as 14 March 2017 but server connection was not possible before the event.

A later Splatoon 2 demo, the Splatoon 2 Splatfest World Premiere, was released in July 2017.

During the Global Testfire, players were able to enter online matches of Turf War and use either the Splat Dualies, Splattershot, Splat Roller, or Splat Charger. Playable stages included The Reef and Musselforge Fitness. The Inklings players were able to play as wore a preset of different outfits that are from the same ones on promotional images and renders. All headgear had Ink Recovery Up, all clothing had Quick Respawn, and all shoes had Special Saver.

All eight hairstyles in the final release before Version 2.0.0 were represented, and the Inkling with each hairstyle wore a unique set of gear, shown below.

The Testfire was able to be played for one hour from each of the following times:[1]