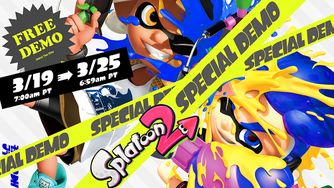 The Splatoon 2 Special Demo was a free Splatoon 2 demo available on the Nintendo eShop. Similar to Splatoon 2 Global Testfire and Splatoon 2 Splatfest World Premiere, it allowed players to engage in free four-on-four Turf War with other players who own the full game, with additions of Salmon Run and Ranked Battle, at scheduled times. Players who downloaded the demo received a 7-day free trial for Nintendo Switch Online. The demo was playable between 19 March 2019 and 25 March 2019 in non-Japanese regions, and between 26 March 2019 and 1 April 2019 in Japan. In addition, the Splatoon 2 game was available at a discounted price on the Nintendo eShop during the duration of the Special Demo.