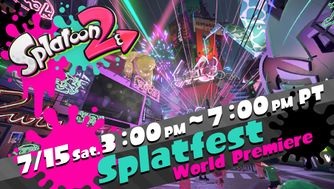 Splatoon 2 Splatfest World Premiere was a free Splatoon 2 demo available on the Nintendo eShop and was the successor to the Splatoon 2 Global Testfire. It allowed players to engage in four hours of four-versus-four Turf Wars at scheduled times ahead of the release of the game. There were two versions for the demo: the Japanese version where players from Japan participated in the Rock vs. Pop Splatfest, and the English version where players from North America, Oceania and Europe participated in the Cake vs. Ice Cream Splatfest. The event took place on 15 July 2017 at 08:00 UTC for four hours.

A post-release demo, the Splatoon 2 Special Demo, was released in March 2019.

The Splatfest World Premiere was a free demo that only allowed players to play the Splatoon 2 tutorial, see the news announcement of the Rock vs. Pop or Cake vs. Ice Cream Splatfest and choose a side. All of this could be done in advance of the Splatfest event. Unlike the full version of Splatoon 2, the Splatfest World Premiere had only two stages per two hours. For the first two hours, Starfish Mainstage and Inkblot Art Academy were playable. For the last two hours, Moray Towers and Humpback Pump Track were playable.