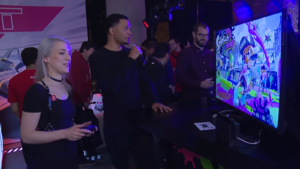 A live demonstration of the demo from the Nintendo Treehouse.[1]

The Splatoon 2 Switch event demo was a demo of Splatoon 2 featured at Nintendo Switch hands-on events starting in January 2017. It was the first publicly playable version of Splatoon 2, for the press and later the public.

Similar to the E3 2014 Splatoon demo, the Switch event demo allowed for eight players to play a tutorial and two rounds of Turf War in a local LAN connection, all on the new stage, The Reef. Many were set up in Nintendo Switch hands-on events around the world. The main version featured several Switches connected to a TV, each using a Nintendo Switch Pro Controller, and some Switches in handheld mode.

at the same time to start the demo. They would then complete a tutorial taking place in The Reef. The player then must chose between the Splattershot, Splat Roller, Splat Charger or Splat Dualies before playing two matches against other players in the event in The Reef.

Each player was automatically given the name "Player" and a corresponding number, with the possible names ranging from "Player 1" to "Player 8." Players 1 through 4 were always on a team, and Players 5 through 8 were similarly grouped on the opposing team. Each player began as an Inklings depicted in promotional materials, all with Ink Recovery Up, Quick Respawn and Special Saver chosen so they would have as long as possible to experience the game. These abilities are the same ones used for the starting clothes in Splatoon and the Testfires.