From Inkipedia, the Splatoon wiki
(Redirected from Splatoon Live in Makuhari)
Jump to navigation Jump to search 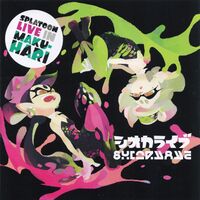 Splatoon Live in Makuhari -シオカライブ- (Shiokalive, meaning "Squid Sisters Live") is a live album by the Squid Sisters.[1] It contains recordings of the performances from Niconico Tokaigi 2016 and Cho-ongakusai 2016. Additionally, it includes in-game music that was not released on Splatune and a demo version of City of Color.[2] It also comes with the translations for the spoken dialogue between songs at the concerts and the lyrics to all the songs performed. It was released in Japan on 13 July 2016.

It debuted at #8 on the Orion Albums Chart and at #11 on the Billboard Japan Hot Albums chart.[3] It sold 10,345 copies during its launch week, with an additional 2,157 copies reported to have been sold in its second week.[4]

* Backstage is a hidden track, playing after track 40.[6]

From the booklet included with the album. As with the lyrics that came with Splatune, these lyrics are nonsensical; the Japanese hiragana and katakana simply give the pronunciation.