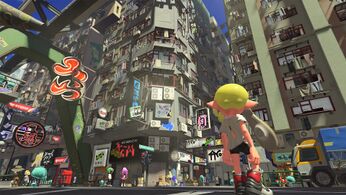 Splatsville is the main hub of Splatoon 3. It is located in the Splatlands.

After the events of the Chaos vs. Order Splatfest, Splatsville's development increased rapidly as more Inklings and Octolings started to move to the Splatlands. The city is also known as the "city of chaos." The city is extremely crowded and different shops and apartments can be seen. Planes and trains occasionally pass by like they did in Inkopolis Plaza and Inkopolis Square from previous games. There is a staircase shown in the announcement trailer as well, but it is unknown where it leads.

During the announcement trailer, a building that appears to be Ammo Knights can be seen to the left of the main character right before the game's logo is shown.

In the banner used for the official Splatoon Twitter profile, a logo similar to that of The Shoal can be seen behind a yellow splat of ink.

On one of the buildings seen in the announcement trailer, there is a sticker resembling the button on Squid Squad's first album.