For the multiplayer event of a similar name, see Splatfest. Spreader Splatfest is the seventh mission in Splatoon's single-player mode, Octo Valley. It gets its name from its heavy use of Spreaders. It is the first level in Octo Valley to use Spreaders.

When advancing to Area 2, Mission 7 can be found in the south-west of the area on a small tower.

There is a pathway that is inkable and immediately after, there are Spreaders. These move across surfaces spreading ink. You can either ink on top of the Spreader or wait until it reaches one end, then swim across quickly. There is a second Spreader that has a Balloon Fish on which can be used to ink the surrounding area. Again, swim across, and this time there are two paths. It does not matter which one you move to. There is an Octotrooper on the next Spreader. Take this out then make a path through. You will then come up to a wall you cannot climb without the use of ink. Ink the path, swim up, then hit the Inkrail to swim on it.

Straight after the checkpoint in a crate is the first piece of armor for this level. After you have shot ink at the crates blocking the path you need to take out the Octocopters. There is then a Spreader on a wall, so you need to make a path up to get over the wall. After completing this, shoot ink at the crates and take out the Octotrooper that emerges from the ink to make the path easier. There is another Spreader on this wall. As before, make another path up and swim quickly. To help you there is a Balloon Fish you might need to ink to help get up the wall. Turn straight around and ink the start of the Inkrail, which will take you to checkpoint two.

There are a set of Spreaders straight past the checkpoint which goes around the platform in a circular motion. There are then some circular platforms that you can step on to help splat two Octocopters. It does not matter if you fall because there is ground beneath. Take the two Octocopters out. After this, another two Spreaders are going in a circular motion. Jump onto one of them then jump straight onto the platform and splat the box to get the Sunken Scroll. Then, hop back onto a Spreader and jump off onto the platform. Shoot the Octocopter blocking your path. There is now a big wall you need to climb, so ink a path straight up to get past.

Hop straight down off the wall and destroy the two Octocopters. There are now two platforms that contain several enemies. Take them out to make it easier and hop onto the launchpad.

Straight after is the second piece of armor. There is also a circle with two Spreaders, each with an Twintacle Octotrooper. Taking these out is optional, but if you want an easier time, then shoot them. Head around to the gap in the glass then hop down and head into the launchpad. You have reached the final checkpoint.

In this checkpoint, there are four Spreaders, two with a Twintacle Octotrooper on and two with a Shielded Octotrooper on. In the middle, there is a Balloon Fish, and if you want an easy time, splat them then make a path over to the Zapfish and claim it. 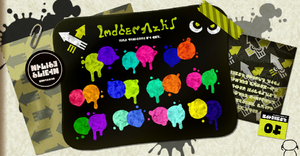 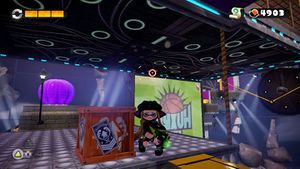 Location: At the second checkpoint, under the platform after the drop. After hitting the checkpoint, go past the first obstacle and get rid of the Octocopters after the small drop. Face the walkway constantly being scrubbed over with purple ink. Hop on one of the Spreaders and ride it beneath the walkway, facing the platform you were just on previously. Jump off and collect the scroll.

Armor 1 location: Straight after checkpoint one, in a crate.

Armor 2 location: Straight after checkpoint four, in a crate.