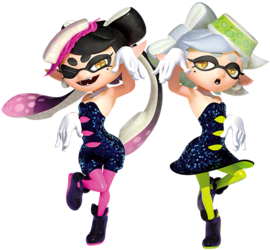 The Squid Sisters (Japanese: シオカラーズ Shiokarāzu, lit. Sea O' Colors) are a pop idol duo in Inkopolis, consisting of Callie and Marie (アオリ、ホタル Aori and Hotaru). Together, they host Inkopolis News, announcing events, updates, and the current stages in rotation. They also host Splatfest events, with each Sister representing one of the two teams. Despite their name, they are actually cousins, not sisters.

Callie's color scheme is magenta and black. She has an edgier design in comparison to her cousin, with angular eyes and perked-up ears. Her tentacles are long and black, tied in a large bow on the back of her head and fading to pink on the ends. She is very excitable and positive, often making innocent, straightforward comments with a grin on her face. Her solo song, Bomb Rush Blush, is a fast-paced and exuberant pop song, showing her energy and playfulness as she runs around the stage.[2]

Her favorite type of weapons are rollers, and she has been seen to use a

Marie's color scheme is lime green and light gray. She has a more laid-back design in comparison to her cousin, with heavy-lidded eyes and slightly drooping ears. Her tentacles are long and light gray, tied in a large bow on the right side of her head and fading to green on the ends. She is less excitable, usually only giving a small smile. Many of her comments are sarcastic, though never outright intended to be mean-spirited. Her solo song, Tide Goes Out, is a slow, serene song, with movement kept mostly to her arms.[2]

Her favorite type of weapons are chargers, and she has been seen to use a

Inkopolis News is Inkopolis' news program, announcing events and updates on new features in Splatoon. Inkopolis News Studio can be found on the upper level of Inkopolis Plaza, where the Squid Sisters can be seen in their studio.

Callie and Marie in different outfit colors for Splatfest.

The Squid Sisters also hosted Splatfest events, a multiplayer event in which players of a region divided into opposing team, with Callie and Marie each representing a different team. Callie's team was always shown on the left side of the Splatfest artwork and Marie's team on the right. For the duration of the event, their clothes and tentacles temporarily changed color to match that of their team's ink and they performed a live concert in Inkopolis atop trucks outfitted with stage equipment.

At the top-left corner of the box showing the player's Splatfest Power was a pair of eyes representing the Squid Sister they had sided with: players on Callie's team saw her angular eyes, and those on Marie's team saw her heavy-lidded eyes. Both versions had their signature pupils, but with a dark red color instead of the usual gold.

During the results of the fifteenth North American Splatfest, Early Bird vs. Night Owl, Callie got sick of Marie's attitude, causing the duo to argue about who won more Splatfests before getting personal. This hinted at the announcement of the final Splatfest, Callie vs. Marie, which was confirmed to last 48 hours, as opposed to the usual 24-hour duration of a standard Splatfest.

The Squid Sisters reunite at the end of the Octo Canyon missions. Callie later mentions that they have performed alongside Off the Hook, referencing the real-life concert in which they performed together.

The Octo Expansion suggests that the Calamari Inkantation may have magical powers, as Marina claims that no Octoling can hear it and willingly continue to live in Octarian society.

On 30 January 2016, a real-life Squid Sisters concert called "Shiokalive" (Japanese: シオカライブ, Squid Sisters Live) was held at Niconico Tokaigi 2016, a gaming event in Chiba, Japan. It starred digital projections of Callie and Marie, using unique, high-quality 3D models instead of those used in-game. They performed all five of their songs, most of them being extended or remixed slightly, ending with Calamari Inkantation.[3]

On 29 April 2016, the second live performance by the Squid Sisters was held at Cho-Ongakusai 2016, a music festival featuring a variety of popular artists that was held as part of Chokaigi 2016, also in Chiba, Japan.[4] The concert featured the debut of two new songs: Bomb Rush Blush and Tide Goes Out. They were solos sung by Callie and Marie, respectively.[2] The following day, it was revealed that the new songs would be unlockable with the new Callie and Marie amiibo figures that launched July of that year.[5]

On 8 July 2016, their third live performance was held at Japan Expo 2016, a convention dedicated to Japanese pop culture in Paris, France.[6] It had the same setlist as their second concert, with the dialogue in between songs shown in French. The live band's stage presence was also given more of an emphasis in this concert. Later that month, a live album featuring recordings of the first two concerts, Splatoon Live in Makuhari -Shiokalive-, was released in Japan on 13 July 2016.

On 3 November 2016, the Squid Sisters made a small appearance at Niconico Cho Party, a live event celebrating the internet subculture seen on the Niconico website in Saitama City, Japan.[7] As many other artists were also performing at the event, they performed shortened versions of a handful of their songs, but also took advantage of the larger holographic screen set up for other virtual performers. A recording of this appearance was later included with Off the Hook's live album, Splatoon 2 Live in Makuhari -Tentalive- on 24 July 2019.

On 10 February 2018, the Squid Sisters made a special appearance at "Haicalive" (Japanese: ハイカライブ, translating to "Inkopolis Live"), which was held at Tokaigi 2018.[8] After Off the Hook performed Ebb & Flow, Callie and Marie went on stage to perform Fresh Start, followed by Spicy Calamari Inkantation. Afterwards, both the Squid Sisters and Off the Hook performed Now or Never! as the finale. An English version of this concert was held at Polymanga in Montreux, Switzerland before the final rounds of the Splatoon European Championships on 31 March 2018. On 28 April 2018, another Haicalive concert was held at Cho-Ongakusai 2018.[9] Their setlist was the same as the previous recent concerts, but their dialogue in between songs was different. A recording of the first Haicalive concert was included on Octotune (Splatoon 2 Original Soundtrack), as well as a limited edition Blu-ray, which both released on 18 July 2018.

The Squid Sisters' latest appearance was at Haicalive Kyoto Mix, a concert held at the Nintendo Live 2019 event in Kyoto, Japan. It took place on 13 October 2019 with an encore presentation the following day. Their performance was based off of their previous appearances at Cho Party 2016 and at the Haicalive concerts held throughout 2018. Additionally, they sported a different color scheme for part of the concert and went out on stage while Off the Hook sung Ebb & Flow (Octo), chanting as the song finished.

On 30 April 2016, during the Splatoon Gachibon Festival at Niconico Chokaigi, it was announced that Squid Sisters amiibo would be released on 7 July 2016 in Japan, with overseas releases happening the following weekend.[10]

In Splatoon, using the Squid Sisters' amiibo applies all the cosmetic changes of a Splatfest to Inkopolis Plaza and the player can choose what song they perform. This is the only way to see the accompanying dances for these songs, except for City of Color, which was the default for Splatfests. In Splatoon 2, attempting to use either of the Squid Sisters' amiibo prior to finishing the Octo Canyon single-player campaign brings up a letter explaining that they are busy and that they are unable to be summoned. When the campaign is finished, the player will be able to use the respective amiibo to take pictures with Callie or Marie in Inkopolis Square, as well as unlock exclusive gear and songs on Squid Beatz 2 after winning a certain amount of battles.

The Squid Sisters first appeared in issue 1 of the CoroCoro manga Splatoon, where they announced the CoroCoro Cup. They are hosts for that tournament. They are Agent 1 and Agent 2 respectively, appearing as agents in Book 3, escorting Agent 3 and Agent 3.5 and helping out in fights.

Bomb Rush Blush, Calamari Inkantation, and Ink Me Up can be found as soundtracks for the Moray Towers stage in Super Smash Bros. Ultimate, and Callie and Marie appear as the Squid Sisters assist trophy. Once they appear, they sing the intro to either Calamari Inkantation or Ink Me Up while the camera zooms in and the blast lines are brought closer to the center of the stage. Once they stop singing, they disappear and the camera and blast lines return to normal. They also appear as a Spirit, and in World of Light, they both control a pink-colored Inkling.

The Squid Sisters can be unlocked as costumes by beating the "Squid Sisters vs. Bloopers" event or scanning the amiibo variant of either one of them. This marks the first time either can be seen in squid form; they respectively are pink and green squids with yellow plus-shaped pupils and eyelashes that separate them from other Inklings.