For the brand, see The SQUID GIRL. 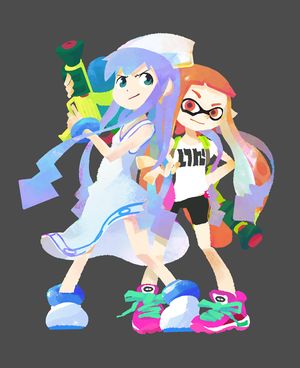 Splatoon-style artwork of Squid Girl and an Inkling.

Squid Girl, also known as Shinryaku! Ika Musume (侵略!イカ娘 Invade! Squid Girl) is a Japanese comic series by artist Masahiro Anbe about a young squid girl that emerges from the ocean in order to invade Earth to punish them for polluting the ocean, but ends up working at a shop nearby in order to work off a debt. The series has also been adapted to animation.

On April 1st, Masahiro posted a drawing of an Inkling wearing a School Uniform to his Twitter account.[1] This was followed in May with Squid Girl and Splatoon crossover artworks by Masahiro, including artworks in the comic magazine, Weekly Shounen Champion.

A page in the Weekly Shounen Champion magazine announced an upcoming Splatoon release:

In English, this translates as:

On 5 August 2015, three pieces of gear based on Squid Girl were released, including the SQUID GIRL Hat, SQUID GIRL Tunic, and SQUID GIRL Shoes.