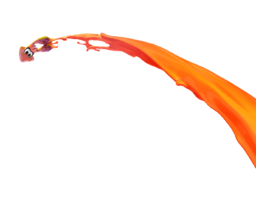 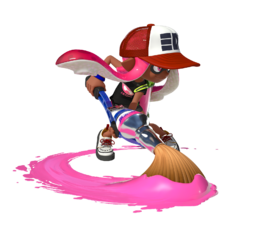 In humanoid form, an Inkling or Octoling can run on flat surfaces, as long as those surfaces are not covered with a color of ink that does not match that of the player. Run speed can be increased in online battles with the Run Speed Up ability.

Weapon speed types[1], colloquially known as "weight", are categories that main weapons belong to based on how fast Inklings and Octolings can run and swim with the weapon equipped.

The weapon speed type mechanic was not used extensively in Splatoon. At first, it was only applied to the Rainmaker, which reduces swim speed by 20% and reduces run speed by 60%. The mechanic was first applied to main weapons in version 2.7.0 of Splatoon.

In Octo Expansion, slow-type weapons are normal instead. However, the Rainmaker's speed type is unchanged in this mode. 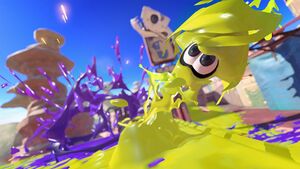 An Inkling performing a Squid Roll.

The Squid Roll is a movement technique introduced in Splatoon 3 that allows the player to leap and twirl out of their ink. The player is also able to reduce a small amount of damage while acting while excess damage will be received anyway, akin to Ink Armor. A Squid Roll can be performed while swimming through ink at top speed by pressing while simultaneously flicking in a different direction.

The directions possible to squid roll encompass a 180° semicircle behind the player. Effectively, this allows them to roll backwards, to either direction 90°, or any angle in between.

A few techniques exist to perform a Squid Roll in the direction the player is already going. This is referred to a Squid Dash or a Forward Squid Roll by some players.

The Squid Roll can be cancelled into weapon attacks by pressing , or mid-roll. Doing so performs the corresponding attack, bringing the player out of swim form and ending the Ink Armor effect while retaining the momentum of the Squid Roll.

The Squid Roll can also be cancelled entirely before it is even performed, by firing a weapon immediately before inputting the jump command. A full-cancelled Squid Roll causes the player to reverse momentum and jump as if they performed a Squid Roll, but in kid-form without the accompanying Ink Armor effect. Cancelling the roll in this way will perform the grounded version of attacks, such as a horizontal Roller-flick, and may reduce or remove airborn shot-spread for the first shot of Shooter and Blaster weapons, though the latter is not fully tested. 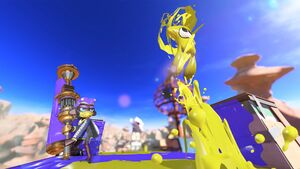 An Inkling performing a Squid Surge, with a player wielding a Gold Dynamo Roller behind them.

The Squid Surge is a movement technique introduced in Splatoon 3 that allows the player to climb walls and jump out high into the air. It can be performed by holding while swimming up a wall, and then releasing.

The longer that is held before releasing, the faster the Squid Surge will be, and the higher the player will be launched at the peak. The maximum spead and height can be reached after the player’s eyes glint, with an accompanying sound.