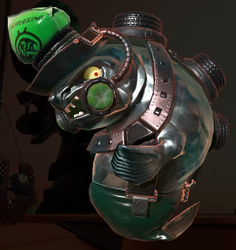 The Steelheads are Boss Salmonids that appear in Salmon Run and Salmon Run Next Wave in Splatoon 2 and Splatoon 3.

Steelheads attack by throwing bombs that grow from the top of its head. The bombs resemble green inflatable bags. The bombs instantly splat players and the blast radius is wide-reaching compared to other bombs. Steelheads can be splatted by attacking their bombs to detonate them before they are launched. The bombs can only be harmed while on the Steelhead's head. The Steelhead moves very slowly and does not start throwing bombs until close to a player. Splatting a Steelhead clears any Lesser Salmonid that gets too close.

Splatting Steelheads a specific number of times in Salmon Run: Next Wave will reward the player with special badges that they can use on their Splashtag.