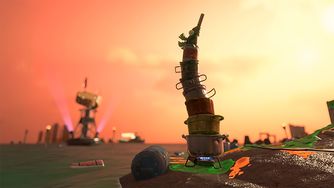 Stingers are Boss Salmonids that appear in Salmon Run in Splatoon 2.

The Stinger uses a weapon similar to the Sting Ray to splat players from across the stage and through walls. Stingers tend to aim for the player that is furthest away from them when they begin firing. Stingers typically appear close to the shorelines but can move around rather slowly. Stingers always appear on a stack of cooking pots placed on top of a gas burner. To defeat them, players must shoot the pots to knock them off of the stack until the Stinger lands on the burner. Their attacks are much more accurate than a player-controlled Sting Ray and can take out an Inkling or Octoling within a few seconds if they cannot dodge it, so players should focus their attention on this Salmonid in particular.