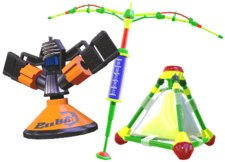 Sub weapons are secondary weapons in the Splatoon series. They use up considerably more ink than a main weapon, and as such, usually serve specialized purposes limited to specific combat situations and are not often used as the main method of inking the environment.

Sub weapons are deployed by pressing

. If the sub weapon is throwable, holding down

will display a trajectory to help the player aim the weapon. If the sub weapon is not throwable, it will be placed on the ground.

Abilities on a player's gear can affect sub weapons. The following abilities have effects that specifically focus on improving the performance of sub weapons.