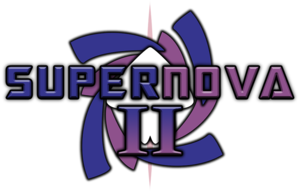 Supernova II was a Splatoon online tournament held on May 21st, 2016.[1] Alongside three other tournaments, Supernova II functioned as a qualifier for the Splatoon Anniversary Invitational.

The tournament featured a set of rules similar to its previous iteration.

Teams competed against each other in a round-robin style bracket composed of sixteen different groups.

This stage lasted 5 rounds per group. Each round had a time limit of 30 minutes (35 for the first round). For each match, both teams were to play a Best-of-3 set of games against each other; the first team to win 2 games would win the set.

The top 2 teams from each group moved on to the next stage.

Winning teams from the previous stage were seeded into a single-elimination bracket.

Each round had a time limit of 40 minutes (50 for the Grand Finals).