An Inkling in front of a variety of surfaces while confronting the Octowhirl.

Surfaces are terrain features in the Splatoon series. There are two types: inkable and un-inkable. Inkable surfaces comprise most of each stage's terrain, being counted towards players' turf counts. Un-inkable surfaces are less common, being used as barriers or stage boundaries or placed to make an area more difficult to maneuver through.

Inkable surfaces are terrain features that can be covered in ink. Ink shot or flung with

will appear on these surfaces, allowing Inklings and Octolings to swim across them. Most inkable surfaces behave identically, despite varying appearances.

Concrete is one of the main surfaces found in Splatoon, being featured heavily in most stages. It appears as a uniform black or gray surface, with few noticeable differences in a single area.

An Inkling standing on tiled floors in Arowana Mall.

Tile is found primarily in Arowana Mall and Walleye Warehouse. Instead of appearing uniform, like concrete, it takes on a tiled pattern. The tiles are typically beige or light gray.

An Inkling standing on a wooden surface in Camp Triggerfish.

Wood features heavily in Camp Triggerfish and some locations in Blackbelly Skatepark. It is also the material of crates, telephone poles, and planks found throughout Octo Valley.

Metal can be found most often in Walleye Warehouse, Saltspray Rig and Bluefin Depot. It appears as a silver or rusted red pattern often adorned with rhombic designs.

Some brick in Bluefin Depot, covered in some vines.

Brick is used frequently in Octo Valley and various single-player missions. It can also be found in Bluefin Depot. As the name suggests, it appears as a common red or orange brick pattern. These bricks are often broken or cracked.

Soil is the main surface in Kelp Dome. It appears just like flat soil, with a brown appearance and the presence of a few weeds.

Grass found in the center of Urchin Underpass.

Grass is a type of surface that is primarily green or blue, often decorated with flowers and other small plants. It appears very frequently in Octo Valley and The Reef, and significantly less frequently in Urchin Underpass, Blackbelly Skatepark and Flounder Heights.

A plant found in Kelp Dome.

Plants are small surfaces that are often overlooked in Kelp Dome and Arowana Mall. They appear as beds of flowers in rectangular containers near each team's spawn point.

An Inkling standing near some cardboard paper in Walleye Warehouse.

Paper appears primarily in Walleye Warehouse on top of crates. They can be inked and swam on. 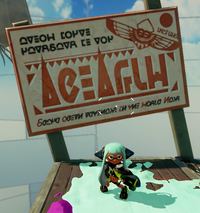 Signs are plastic and metal signs that appear throughout Octo Valley, Inkopolis, and in the training area behind Ammo Knights. They tend to appear vertically, displaying various messages and graphics. They act like normal surfaces.

Although trees are inkable, Inklings cannot swim up them as their leaves provide no support. They appear in Octo Valley, Inkopolis Plaza, Flounder Heights, Urchin Underpass, The Reef, and Inkblot Art Academy, but serve practically no purpose other than an obstacle.

Cicadas can be heard singing in the trees in Flounder Heights, unlike the trees found in other parts of the game.

Glass is a common un-inkable surface, appearing in stages such as Urchin Underpass and New Albacore Hotel, and even in the fight against the Octowhirl. They appear in lots of stages as walls.

An Inkling squid going through a grated wall in Urchin Underpass.

Grates are semi-solid surfaces that allow the player to pass through, intentionally or not, while in squid or octopus form. The grates themselves, however, cannot be covered in ink. Grates can be found in maps such as Bluefin Depot and Kelp Dome, for example.

Water is a common liquid; it is less a surface and more a hazard, as it cannot be stood upon, much less inked. Water is deadly to the touch for Inklings and Octolings. Water can be found in maps such as Camp Triggerfish and Arowana Mall, in addition to various locations in Octo Valley.

A barrier in Camp Triggerfish.

Bumpers can be found in multiplayer and Octo Valley in various locations. Their rubbery, cushiony qualities prevent the barriers from taking any ink whatsoever, making them excellent for cover. Be warned, however, as a weapon with an arc (such as a Slosher) and Rollers can go over the top of the bumpers and still strike any vulnerable players behind. Bumpers can be found in stages such as Kelp Dome and Moray Towers, as well as various locations in Octo Valley.

An Inkling firing just over a tarp in Bluefin Depot.

Tarps are large surfaces of plastic that cannot be inked at all. They are uncommon but they can be found at the top of containers in Port Mackerel and in various spots in Bluefin Depot and Snapper Canal.