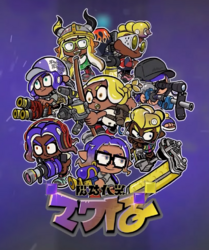 Tableturf Battle is an in-universe collectible card game inspired by Turf War battles, but turn-based and designed for two players. Both players use the cards in their custom decks to add ink patterns to a grid-like board, competing to have the most ink on the board at the end of the game.

Tableturf Battle was announced on 10 August 2022 during the Splatoon 3 Direct. It was released with the launch of Splatoon 3.

There are currently 175 cards to collect. The cards are based on weapons, characters, and other Splatoon concepts such as Tower Control. 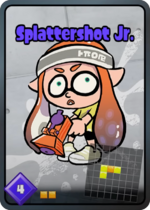 The face of every card has:

The ink pattern depicted in the grid is added to the board when the card is played. Most card patterns contain exactly one Special Space, indicated by their unique color.

There are three levels of card rarity: Common, Rare, and Fresh. The color of the card's name and the diamond in the lower-left corner correspond to this rarity, being either purple, yellow, or multi-colored respectively.

Each card has a sequence number that is not shown on the card but can be used for sorting. For example, the .52 Gal card is No. 7.

Each card has an upgrade level that affects the card's appearance. The level is indicated using one, two, or three stars.

Every player receives a Starter Deck from Staff at the Tableturf Battle Dojo upon speaking to them for the first time.[2] This deck is always comprised of these 15 cards in this order.

Players can earn either normal or "fresh" card packs by increasing their Tableturf Battle rank[3] or catalog level. The Shell-Out Machine also has a 4% chance to dispense normal packs, but currently does not offer the opportunity to dispense fresh card packs. The player can find up to seven card packs by exploring Alterna as well. A pack contains five random cards,[3] with a fresh pack containing one guaranteed Fresh card. Players cannot own more than one copy of a card;[3] duplicates are converted to a certain number of card bits based on their rarity.[3][4] Players can spend card bits to acquire new cards or upgrade the appearance of existing cards.[3]

Upgrading a card from ★ to ★★ changes its background image.[5]

A deck contains 15 cards. A player can save up to 16 decks, assigning a name and a card sleeve design to each one. When selecting or editing a deck, the total number of spaces covered by the ink patterns of cards in the deck is shown.

When the player receives the Starter Deck, it is automatically saved to their first deck slot with the name "Starter Deck" and the default sleeves.

New sleeves can be unlocked by reaching certain Tableturf ranks or by defeating a (non-jellyfish) rival 30 times on Level 3.

Crusty Sean's sleeve design is available as a Wandercrust reward.

A game lasts 12 turns. Each turn, working simultaneously, both players choose a card from a hand of four cards and decide where to place that card's ink pattern on the board. Players may also pass, discarding one card from their hand and gaining a Special Point. 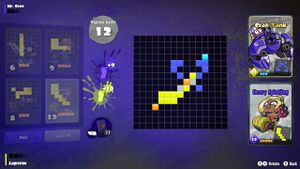 A card's ink pattern must be placed orthogonally or diagonally adjacent to spaces that already contain the player's ink. On a normal turn, it cannot overlap existing ink.

If both players try to place their ink patterns in the same spot, one of two things happens:

When a Special Space on the board has no empty spaces adjacent to it (including diagonally), the space begins to glow with a fiery effect. When this happens, the player that the space belongs to earns a Special Point. Special points can also be earned when passing turns.

The player with more ink spaces on the board at the end of the game wins. However, the player who resigns always loses, regardless of how many ink spaces they have.

At certain point thresholds, the player's Tableturf Rank increases, allowing access to new opponents and unlocking new Tableturf Battle stages (for use when testing out decks in the editor), as well as Splashtag and Emote options.[3]

Some player avatars holding a small spread of cards can be played against; they gather by groups of three to the right of Hotlantis and around the Battle Dojo. Each takes the form of a computer opponent using that player's deck. Beating them can award either 115, 130 or 150 exp, as shown before challenging them. AIs awarding 150 exp have a much more aggressive playstyle.

A free update to Splatoon 3 will allow online play against other human players sometime in the future.[1]

There are nineteen Splatsville Locals to fight in Tableturf Battle, each of whom wields a unique deck of cards. When the player wins against a rival three times, they unlock access to level 2 for that opponent, then once they are beaten another three times at level 2; level 3 is unlocked.

There are eight stages:

Stage names in other languages