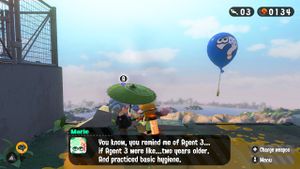 Okay but, the revision I did, it made sense, I was just hunting for the said quote that I mentioned.

All of the age stuff currently on this page is just nonsense. 14, 15, 16, 18? Seriously? Just read the actual Squid Research Lab article that's cited, it says she's "a bit older than most of her Inkling customers, and teasing them is one of her favorite pastimes". The teasing part is supposed to show that she is actually much older (like 40s, 50s) than the Inkling players, so "a bit older" is an intentional understatement to avoid bluntly calling her old. I'm going to remove all speculation and replace it with just that quote so people can come to their own conclusions like I did in the previous sentence. Heddy (talk) 01:38, 29 November 2017 (UTC)

Heh, I also noticed that Inklings calling her "aunt" was in the same section! Makes it seem even stranger to call her a teenager or young adult in the sentences that follow. Hopefully having just the quote clears up any potential conflict or inconsistency that could arise over the topic of age! Heddy (talk) 01:51, 29 November 2017 (UTC)

Heh, you know what's funny. I recently got the splatoon 2 art book and I just translated Flow's page (with Google translate). It states that she looks significantly younger than she actually is. She's essentially an eternal youth (which is another thing that Nintendo likes to do with their characters.) Whose true age is never known. She's like Sheldon, in human age (or inkling age ahah) they're probably super old; but by their species sake, at least for Flow, in their middle ages. So like 30 or 40.

Makes me wonder about the other characters now, because animal species ages do not go by the normal aging process (the year by year system)

Sure some of them have confirmed ages, but that may not translate to how many years they were alive, since the eternal youth trope has been confirmed for two characters now.

Edit: removed some mistranslated information, like I said, picture to text is super finicky. I also fixed some of my grammar errors as well, this was all edited from my phone.

But since I have the art book now, would you like me to try to scan them for character art? Flow's page is rather... Interesting, I personally prefer the short haired design she has but it also shows that she might act a bit childish (going off assumptions) and one of her drawings shown her passed out with a empty glass and empty bottles, both of which probably contained alcoholic beverages.

She was also male at one point durring the concept.

And the story behind her meeting Craymond is apparently bumping into him when he was extremely lost on his travels.. from what I got from the most accurate translation from the picture to text translation featured. Again, super finicky.

Is it most likely that she is better at looking, smelling, or is equally good at both? and is it noteworthy enough to go in the article? Coelofloato (Grunts) (Sprays) 19:28, 15 May 2018 (UTC)

The fact that you're asking which is most likely suggests that it's pure speculation, which doesn't belong here. I don't think it would be noteworthy enough, regardless.