I feel like people miss the fact that Inklings are literally made of ink.

That's why they dissolve in water, can swim through grates, and reform out of Spawn Points. I suggest we add an "Anatomy" section with the picture of the Sunken Scroll describing the Inkling without bones, where we can go into detail about this. Before I added this fact to the trivia section, there was no mention whatsoever about Inklings being made of liquid on the page. It's a huge part of their species, so I feel like we need to delve into it more. -

In May, Marie talked about a holiday named "Squidoween" in the Fancy Party vs. Costume Party Splatfest. Should that be put in an "other holidays" section, or... The E-Litist

Or should it be in the same "holidays" section, but with another heading for a paragraph about Squidoween? Just making sure before I/anyone else makes an edit here. The E-Litist

I was reading the Squidmas section and one of the sentences has an error. It says "According to her cousin Marie, Father Squidmas isn't real and all of their interactions with him are simple their grandfather dressed up as him.". Could someone change simple to simply? BlazingInferno (talk) 02:24, 9 March 2017 (UTC)[reply]

Seeing as there's a bit of an edit war happening with this page right now, I think it would be good to talk about the stuff there might be disagreements on.

If anyone has input or thoughts feel free to share! Until this stuff gets agreed on, let's try not to keep changing those bits of the article, heh.

We looked into this on Discord and found that the Inkling squid form has a total of 10 limbs. In-game, it's not entirely apparent that there are four arms on the underside, as it could be interpreted as tentacle geometry:

However, inspection of merchandise items clearly shows that there are in fact four arms back there:

They're most easily visible on the Splatoon 2 amiibo:

In merchandise, the tentacles are strictly white underneath, whereas in-game the tentacles blend into the body color. The distinction is more apparent in the keychain image. --GuyPerfect (talk) 19:10, 9 May 2018 (UTC)[reply]

Well, it is rather inconsistent whether the 4th arm pair is a branch of the tentacles, standalone arms, or degenerate limbs, so we shouldn't comment on the number.

Please do not use talk pages for idle chit chat that leads us nowhere like the recently added trivia. --Raltseye prata med mej 22:08, 10 May 2018 (UTC)[reply]

What do we know about inkling diet?

We know that they lost their radula for a tongue, and have sharp teeth, so I think that they wouldbe predators. Coelofloato (Grunts) (Sprays) 06:46, 25 May 2018 (UTC)[reply]

This might answer your question, but my only concern is what were they able to have to eat from the first Splatoon. AsrielTheInkling (talk) 11:07, 25 May 2018 (UTC)[reply]

We know that they can digest plant matter, and probably gluten, but that's probably a thing like adult humans drinking milk. They don't have radula, but have tongue. I think they mainly ate sponge, or some other soft animal flesh, in the early, preagricultural stages. They probably eat by pushing food foward with their tongue, cutting food with their front teeth. Coelofloato (Grunts) (Sprays) 17:32, 25 May 2018 (UTC)[reply]

Squids/Inklings have been confirmed to have several hearts. Cap’n Cuttlefish says so right at the start of Octo Expansion. If anyone knows a good place to put this fact, could they insert it?

Please remember to use ~~~~ at the end of your suggestion to put your signature and timestamp. Also, can you show me where Cuttlefish said that? I can't find it myself, and I think this would fit into the Trivia section. -tecanec (talk) 09:36, 19 June 2018 (UTC)[reply]

I took a screenshot of the dialogue where he says "Any fan of the Squid Sisters is a friend of mine! I mean that with all of my hearts.", when he meets Agent 8. I can upload it if it's necessary? I know Marina said something similar in the live concert. --Hinamin (talk) 18:21, 19 June 2018 (UTC)[reply]

I uploaded the image, but I don't know where to mention this info (fx trivia or appearance), as it's a minor confirmation or implication rather than explicitly stating Inklings have multiple hearts. --Hinamin (talk) 13:46, 20 June 2018 (UTC)[reply] 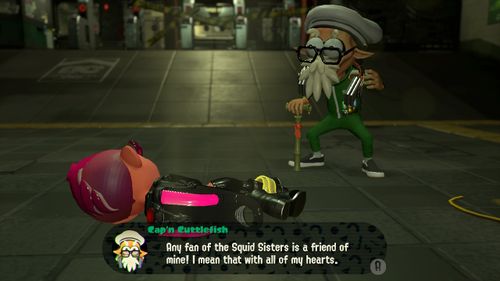 In the 5th sunken scroll of the first game it is mentioned that Inklings have no bones, however Cap'n Cuttlefish also mentions that he has a cuttlebone in Octo Expansion. Therefore should the this information be moved to the Trivia section instead of the appearance section? (E.g. "The 5th Sunken Scroll found in Octo Valley states that Inklings have no bones. However in Octo Expansion, Cap'n Cuttlefish, who is presumed to be an Inkling, states that he has a cuttlebone.") (Also maybe the "presumed" part can be cut out.) --Hinamin (talk) 12:48, 1 July 2018 (UTC)[reply]

The cuttlebone mention always sounded like a joke, and it was well-established that Inklings had no bones before he made the joke. I will add some ref tags after the no bone thing. Heddy (talk) 13:11, 1 July 2018 (UTC)[reply]

There are not references to inklings having no bones that come from reliable sources. So it is speculation. And if were going with such a narrow definition of 'bone', we may as well say that they cannot produce a hydrofluoric reaction flame out of their left iris.
Coelofloato (Grunts) (Sprays) 19:31, 1 July 2018 (UTC)[reply]

So should we create a separate page for the Inkling in Smash Bros. Ultimate, or just add a subsection on the main Inkling page?--QuackNSnack (talk) 01:30, 23 October 2018 (UTC)[reply]

Honestly, I think a subsection is fine. It's not a whole other species, it's still an Inkling, so the subsection doesn't need to be too long or detailed imo- Splattersky (talk) 01:35, 24 October 2018 (UTC)[reply]

Why do you not care about the most important nonvital organ to our society? Coelofloato (Grunts) (Sprays) 10:00, 10 February 2019 (UTC)[reply]

I, the grammar king, has spotted a capitalization error in one of your sentences. The error: the word “inkling” isn’t capitalized. Splatoon definition:

a humanoid species of squid in the Splatoon series: there are inklings battling in a turf war.

Listen bud, please give us a link to where you got this from, and prove that source is reliable. Until then, kindly stop it with the edit warring and grammar disputing. £|_@|\/|€1232

I’ve noticed that every time that the word “inkling” is mentioned, it’s capitalized as “Inkling”, this is incorrect as it is not a proper noun. I’ve tried fixing it TWO times but an administrator would come and revert the changes; threatening of banning me if I fix it again. I’ve raised this matter in this section to raise awareness of this error. As you can tell, I’m very serious about grammatical, typographical and capitalization errors.— InklingPRO Error (pro talk) 01:49, 8 April 2020 (UTC)[reply]

I know. They are a Japanese company, but there is also a Nintendo of America. They are most definitely English. In the past, (30 years ago) this argument would have been valid, as they had a lot of translation errors, but no longer. Also, the official English Splatoon website capitalizes it, and that should be the final word. £|_@|\/|€1232

What's your point here, that if you're Japanese you can't know English? Nintendo isn't "new" to English, and Nintendo Treehouse is an entire division dedicated to localization. We follow what NoA does in terms of capitalization and naming. ~SuperHamster Talk 08:38, 9 April 2020 (UTC)[reply]

I thought of this a while back, in one of Off the Hook's Musselforge quotes; where Pearl says a membership there costs "an arm and a leg" (hyperbole for expensive), then Marina says the arm and leg can be "jacked" (meaning severed). This probably means both Inklings and Octolings can regenerate lost limbs, just like real squid and octopi. Could this be added on both their pages? P.J. GT (talk) 00:47, 26 September 2020 (UTC)[reply]

How tall are Inklings & Octolings?

I remember a Nintendo Minute episode on Nintendo's YouTube channel back in March 2018 where the hosts asked questions to the Splatoon and ARMS producers, Nogami and Yabuki respectively. And one question for Nogami was; "What is the average height of an Inkling?" and he said; "150 centimeters" which equals to "4 feet, 11 inches to 5 feet" tall. Could the height measurement be added to the page? P.J. GT (talk) 22:00, 1 February 2021 (UTC)[reply]

In the S3 "Happy New Year!" Twitter-clip, people in the community (and me) spotted that the Inkling Boy in the clip has totally different-looking eyebrows. The eyebrows of Inkling Boys from the previous games are "half-oval-shaped", while the eyebrows of the Inkling Boy in the clip are "trapezoid-shaped". Along with the S3 Inkling Girl seen in the announcement trailer last February has a cut in her left brow and this new clip, could this be confirmation of "Eyebrow-Customization"? P.J. GT(talk)

In Log 5, the text shows that Squids and Octopi ate the crystal pieces that came from squids, and then the squids and octopi evolved into modern Inklings and Octarians. Shouldn't we put that in the Background part of the page? Louis Campfield (talk) 01:43, 27 September 2022 (UTC)[reply]