Should the weapons image (in the main content box) link to Weapon instead of the category page? Or perhaps the migrate the content of Weapon and redirect to Category:Weapons ?

Would it be possible to add the line display: -webkit-flex; to the CSS above where display: flex; is being used in order to increase browser compatibility? Looks great in very modern browsers and that extra line should catch a few more. Squidbina (talk) 04:49, 11 June 2015 (UTC)[reply]

Showing maps in the countdown

We can probably put the maps for regular and ranked that are being played now in the countdown. Example:

Something like that. It would just be a little add on to the countdown that you could do.

There is no way to do this, without someone having to update it every four hours. Can't guarantee accuracy, so unless automation is possible, I'm against it. Luke (talk) 16:32, 6 July 2015 (UTC)[reply]

I do recall coming across this, which is apparently automated from this. May or may not be practical for this wiki, though. Miles of SmashWiki (talk) 21:48, 6 July 2015 (UTC)[reply]

What if we changed the appearance of the Wiki to kind of match the appearance of Inkopolis Plaza during Splatfest? Make it more disco-y? I think it would be a cool thing to do and a good way to signify that Splatfest is going on :P Now dat's a nutty kid. 18:30, 18 July 2015 (UTC)[reply]

Just a little thing, could the Splatfest text on the main page be bracketed so it can lead to the Splatfest page itself? There's no direct link to it despite having information on the Splatfests. Also update the winners of NA and EU's 2nd event please. --CreatorGX (talk) 19:48, 23 July 2015 (UTC)[reply]

That seems like a poor idea. NA/EU Splatfests and JP Splatfests are at totally different times. Assuming the schedule is the same, the page would be inaccurate half the time if we didn't update it after the fest itself.
It would be much better if we simply put "Unknown" for the next Splatfests, and make changes as they come. Drsonic1 (talk) 23:08, 26 July 2015 (UTC)[reply]

I made the title link to the Splatfest page and did what Drsonic requested. Thanks for letting us know how to make the wiki better! - ShrimpPin 23:40, 26 July 2015 (UTC)[reply]

The Splatfest timer currently says the NA Splatfest is over, but it's actually splatfest time right now (And for the next ~15 hours)

Like other countdowns, can we add countdowns for new content such as weapons or maps. (new content releases every other Wednesday/Saturday 2:00 UTC) InfiniteMusume (talk) 08:46, 24 July 2015 (UTC)[reply]

Something strange with the Featured Article...

The title for the Featured Article box is showing up as uh... "aN:aN:aN". I looked at the source for both the main page and the FeaturedArticle template, but I can't tell what's causing it, they both look fine. I don't know if this is happening for anyone else, but just thought I'd bring it up.

Oh yeah, I took a screenshot: 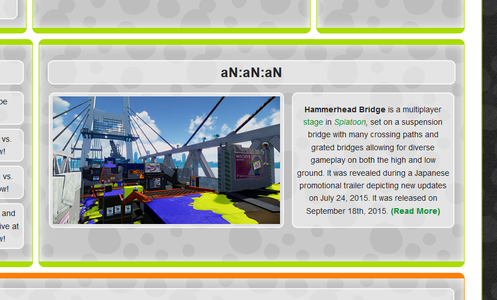 It seems that the countdown code from the previous block is leaking into the featured article block. -- Prod (talk) 04:17, 11 October 2015 (UTC)[reply]

Pokemon splatfest help me out

I need some i fo anout the pokemon splatfest please. I chose a team to play i live in Massachusetts but where and how do i get my tshirt to play? Do i just join in and play like mormal? Is there anything special that i need to do? It says it was suposed to start at 10 p.,. But its not on yet?. Help me out here pls — Preceding unsigned comment added by Kimmycat1977 (talk • contribs) 03:48, 20 February 2016‎ (UTC)[reply]

On the main page, it says that version 2.6.0 introduces Wasabi splattershot, berry splattershot pro and fresh squiffer. However, these are coming in the next update in April. Could somebody fix that, as I can't (only special people can). Mr Squid (talk) 05:20, 9 March 2016 (UTC)[reply]

We should add polls to Inkipedia, like other wikis (and wikias) do. Examples: What is your favourite special (though I already have a blog about it), who is your favourite Splatoon character?, what sort of new updates do you want? Just an idea... (you could put this on the Ink Pump but this is more for the main page). What do you think?

For way more than two months. ;)

(e.g. Super Mario Wiki - Mario) or something like that.

Splatfest has come to an end

Now after the final splatfest I've been thinking about few options to fill up the main page:

I did a first sketch in my Sandbox page if anyone wants to look at that.

Maybe we should add a new thing to our page like the gear or weapon of the day, and we can add gear suggestions for certain modes people are struggling with or if they want to try something new!

Yes that's a great Idea! The only thing is that, I don't even know how to edit the main page and how to add this to the main page! If you want, I can give prefferred Gear sets for any weapon, each day different, please remind me if I do the same gear sets (if this even happens) and add a certain gear or weapon of the day and I'll work with that! :3 This can help the guests to our wiki and maybe you guys playing splatoon!

Recently I saw at Quickstart about some new content and it said:

They said no more content. Do you have any evidence? link perhaps?

Can only see one out of two stages

For Regular and ranked,I can only see one of the stages,the other one is blocked ----Jedi Master

"World championship The final team introduction is Deadbeat, the US delegate, the host country. The champion of the American online convention "Splatoon US Inkling Open". Because they never played together only online, they say they have never met each other. I'm looking forward to the day of the tournament, what kind of the rapists are."

This is from the splatoon JP twitter on Deadbeat, I don't know if they were just being to the US, or it was a google translate fail.

Should we divide the weapon categories even more on the navbox? I mean instead of lumping Rollers and Brushes in the same Roller category, divide them into Rollers and Brushes. Same for normal Shooters, Blasters, and Burster (L-3, H-3, Squeezer. Category name debatable). Cause ingame, they do divide them when listing them out in testing range. Thinker224 (talk) 17:27, 17 April 2018 (UTC)[reply]

This has been discussed and we decided against doing that.

The news section is effectively the featured article section. The old process (see Inkipedia:Featured content) required voting and discussion and did not allow for the featured section to be freely updated by anyone, so the section ended up never getting updated. The new Featured page (see Main Page/Featured) allows any Inkipedia editor to update it with the latest news, featuring articles in the process by linking to them. Heddy (talk) 02:25, 21 June 2018 (UTC)[reply]

There's an issue with the script that outputs the SR rotations. We're aware of the issue and are waiting on the fix to be implemented.

I'm aware that many articles have Weapon Demonstration videos, but picking up the H-3 Nozzlenose D was still difficult. My point is: I wonder if we could possibly find some gameplay videos (i.e, real matches) to post on the weapons articles? 5p1k3 (talk) 12:04, 31 October 2018 (UTC)[reply]

Also, I propose that short and concise descriptions of how to use main/sub/special weapons be added. If someone has thought of this already, I haven't seen it. 5p1k3 (talk) 12:46, 31 October 2018 (UTC)[reply]