From Inkipedia, the Splatoon wiki
(Redirected from Talk:Octo Valley)
Jump to navigation Jump to search

It's come to light that the name Hero Mode does not exist in an official capacity: instead it is a transliteration from Japanese and leftover from teasers pre-release where official names had not been announced. Many fan sites before release adopted this name, hence the proliferation.

The official name for single player is "Octo Valley" shown by the official website, Iwata Asks, and Prima. Therefore, the Hero Mode article should be merged and redirected into the Octo Valley article and all links corrected. This will include renaming categories Hero Mode to Octo Valley.

I can get my bot to do it so it won't take any editing time: however it is obviously a big change so a heads-up or discussion is necessary.
Slate Talk Contribs 13:42, 27 June 2015 (UTC) 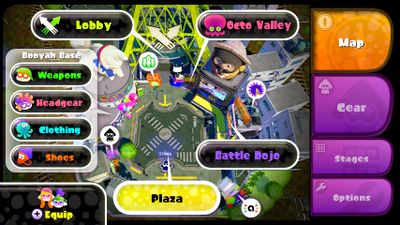 A wiki that forgoes accuracy for the sake of people's inaccurate whims is an ugly sight to behold. I'm all in favor of using the correct name. Plus, changing the name won't really throw people in a loop. Most people I talk to just call it "single player". – EspyoT 13:44, 27 June 2015 (UTC)

I agree. I mean look at the map on the GamePad while you're in Inkopolis. What does it say; Hero Mode? I didn't think so.NepetaLast (talk)

Recategorising done. ShrimpPin has objections to the merge so I'm going to wait until they post here or we get overwhelming consensus. In summary there is a concern about having Octo Valley as both a Location and Mode -- there should be two articles detailing both.
Personally I disagree as one article can do both, but we'll see. Slate Talk Contribs 00:51, 28 June 2015 (UTC)

Octo Valley as a setting has some lore behind it, like how the kettles connect to giant underground caverns, and how they were running out of power. I think that story background deserves an article of its own, but I think the "Octo Valley" page should be the one about the game mode. My suggestion is for an "other uses" to be present that links to the Octo Valley (Setting) page. --GuyPerfect (talk) 01:58, 28 June 2015 (UTC)

Re: "I think that story background deserves an article of its own, but I think the "Octo Valley" page should be the one about the game mode" Agreed. As I suggested below, perhaps the pages could be "Octo Valley" and then "Octo Valley (location)". —Eli (talk) 03:59, 28 June 2015 (UTC)

I vote for having "Octo Valley" be the article about the location, and "Octo Valley (mode)" be about the game mode. The game mode is a collection of gameplay rules, but the location is what matters to the inklings. It's an entire utopia under their feet. It abridges more than just the hub world. Plus I imagine that, outside of Octo Valley articles, whenever we had to refer to Octo Valley, we'd likely be referring to the location and environment instead of the game mode proper. For instance, it makes more sense to say that the Sunken Scrolls are in Octo Valley as a location instead of as a mode. There might be examples of the contrary though, so by all means, prove me wrong. – EspyoT 08:19, 29 June 2015 (UTC)

I'd prefer having Octo Valley mode as the main article and the location as the Octo Valley (Location) article if we are going to distinguish that way. Reason being is users are more likely to be searching for the Mode and not the place because people who look at gaming wikis tend to want walkthroughs rather than lore [citation needed].
As for referring to Octo Valley, our inbound links to Octo Valley of course refer to the place because otherwise they would be inbound links to Hero Mode instead. We can fix this quite easily.
We could name "Hero Mode" "Singleplayer" instead as that is also an official term, though slightly less accurate than Octo Valley, or forget about the merge and have a clear notice on top of Octo Valley that points to Hero Mode with an explanation.
Slate Talk Contribs 08:51, 29 June 2015 (UTC)

I agree that players will want to search for the mode faster than the location, but I doubt they'd use the term "Octo Valley" for the mode. We could have BOTH article's names be a disambiguation. Wikipedia does it sometimes. Maybe we should actually have a poll for this. – EspyoT 13:01, 29 June 2015 (UTC)
The reason it's called Octo Valley (mode) is because the mode was named after the location, not the other way around. When Inklings talk about Octo Valley, they mean the place. It's a place first and a mode second, at least in my eyes. - ShrimpPin 02:29, 13 August 2015 (UTC)