It might be a strange headcannon, but the manga has Inklings wearing hats to tell who they are (example: Goggles wearing Pilot Goggles). Even when they turn into squids, they have their hats on, execpt shrunken in size to fit the squid!

Oh no! Talk pages should not be used like this!

You should really read our policy on talk pages.

Sorry, just too exicted that people are seeing it!

What did you edit in the Protoginasts catergory?

What did you edit in the Protoginasts catergory?

hello, this is Vectorcest. first of all, thanks for putting my translations on here! second, i just want to address two things.

1) misnumbering the issues was kind of an accident, it was hard to tell that the first issue (now known as issue #0 as seen in the character profiles in volume 1) when i started translating, so i started with Issue 2 to be safe and it has kind of stuck that way. once the translation is finished i'll fix it all up.
2) about Bobble-chan - translating her name that way was not a mistake. "Knit Cap-chan" is too clunky to use in dialogue, and also, the bobble hat is not named "knit cap" in EITHER English nor Japanese. so for the sake of my sanity and dialogue flow, i changed her name to Bobble-chan. think of it like localization.

1) We all make mistakes! It's ok!
2) Sorry for the misunderstanding on why you called Knit Cap "Bobble-Chan". There are other people who actually renamed her Bobble-Chan, supprisingly, like ezokko.
3) about Volume 1 - will you please translate all of it? It seems kinda like a challenge, but hey, what do I know?

Tumblr user "bombcollar" saw this article and posted a picture from it.

Hi! I'm a bit new, but I discovered that Corocoro now has a new issue loosely based on the premise, and characters, of Splatoon 2 seen here (Japanese), but still features the same Team Blue as the main characters. Just so you guys keep note. Thanks! - Andalusio

I ALREADY KNEW THAT!!!

Ah, cool! Just wanted to make sure that we were all in the same page, since some webpages that mentioned the English translations didn't mention the newest edition. - Andalusio

Is this section really necessary? It talks way too heavily about a relatively small portion of the fandom IMO, and doesn't serve much other purpose. Naked Goggles could maybe be reworked, but the other stuff isn't highly significant, at least on the level of Woomy or Splat Tim.

Why are there links to an illegal scanslation here? Especially considering this series has been officially licensed for an English release and has had two volumes released already. --Morgil (talk) 23:10, 13 March 2018 (UTC)

I just want to ask, if everyone finds ok, that I could add the release dates for the French version of the manga (I added already german version) User:OctoBox (talk) 16:23, 27 June 2018 (UTC)

The "Splatoon (manga)" could look similar this (example link). It could contain an overview of the entire manga, not just the first few volumes. This would be much more fair.

And the list article would be like (example link) and contain any info that isn't suitable for the main overview article. Heddy (talk) 20:57, 13 July 2018 (UTC)

I would like to add that this article is the top Google search result for "Splatoon manga". People are seeing this article before they see the publisher's official website! We should make it look good, not arbitrarily hiding content behind another article just because the characters started wearing Splatoon 2 gear! Heddy (talk) 21:05, 13 July 2018 (UTC)

this page has spoilers

Funny you say that, as the wiki has just recently come to a conclusion to remove all spoiler warnings, if you don't want to be spoiled, than simply don't visit the page. KA467 (talk) 21:30, 17 January 2019 (UTC)

What issue is this from? 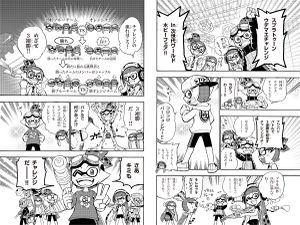 Not gonna lie, I wasn't sure where I wanted to bring this up. I didn't want to do this on EVERY Spy Gear-related... Well, gear. It appears Volume 7 is now out in English by VIZ Media but of course I don't have it, I just browse over the internet. One thing I'm bringing in here is the official translated names of the Spy Gear. I did not want to rename them (I don't think I can either way, though?) if I don't know every officially translated name of the set, otherwise it wouldn't be right for some to have those translated names and some that don't! Due to this, can anyone who actually has that volume confirm all of its translated names? I only know Spy Specs, Spy Bobble Hat and Spy Suit. Fairy27 (talk) 10:35, 11 August 2018 (UTC)