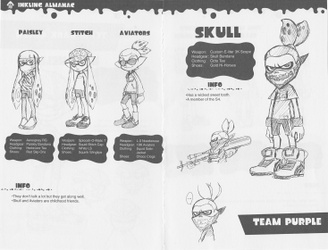 Team Purple is a team in the Splatoon manga. Team Purple is made up of four Inklings, named Skull, Aviators, Stitch, and Paisley.

Skull is a male Inkling with the "Topknot" hairstyle. He wears the Skull Bandana, Octo Tee, and Gold Hi-Horses. He wields the Custom E-liter 3K Scope as his main weapon, but he seems to switch to the E-liter 4K Scope in the Splatoon 2 era and accidentally brings his Custom E-liter 4K Scope against Team Inkfall. He is one of the S4.

Aviators is a male Inkling with the "Topknot" hairstyle. He wears the 18K Aviators, Squid Satin Jacket, and Choco Clogs. He wields the L-3 Nozzlenose as his main weapon. He is also on Team Glasses.

Stitch is a female Inkling with the "Hippie" hairstyle. She wears the Squid Stitch Cap, White LS, and Squink Wingtips. She wields the Sploosh-o-matic 7 as her main weapon.

Paisley is a female Inkling with the "Hippie" hairstyle. She wears the Paisley Bandana, Herbivore Tee, and Red Slip-Ons. She wields the Aerospray RG as her main weapon.

In the first two volumes, Skull is extremely cold and distant. After the battle against Team Blue, he becomes kind of clueless and gets lost easily. Skull also has a sweet tooth and he is able to eat large desserts very quickly. During the Ranked Battle arc, he wanted Team Blue to make Vintage see the fun of battles.

Aviators is cool and collected, and can even be seen complimenting opposing teams now and then. Despite that, he is quiet, and supports Skull to his fullest extent.

Not much is known about Stitch other than she gets along well with the rest of her team and enjoys Turf Wars.

Like Stitch, Paisley's personality is still unclear, but like the rest of her team, she is rather reticent.