Tentakeel Outpost is the first sector of Octo Canyon in Splatoon 2. It holds 3 Kettles and 1 Boss Kettle and is the only sector to hold a small fort and an Ammo Knights Enhancifier with which to upgrade Agent 4's Main Weapons and purchase Sub Weapons. Starting from the Version 3.0.0 update, after the player beats the final boss of Octo Canyon and subsequently enters Tentakeel Outpost for the second time, Callie will appear at Cuttlefish Cabin, alongside Marie. Players can join the Squid Sisters' conversations, and hear their stats from the last 50 multiplayer battles from Callie. 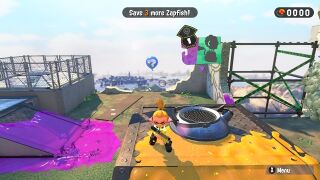 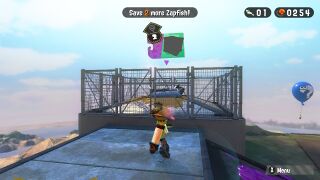 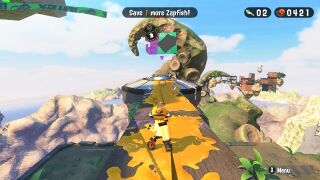 Climb up the wall to the west of the Boss Kettle. There is a small box on the small tower. Break it to reveal the Sardinium. 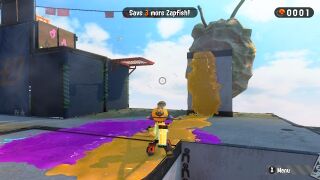 Shoot the wall and climb up, then jump onto the grate 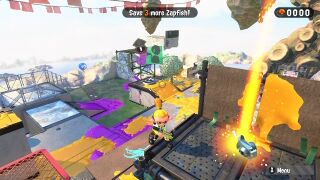 Shoot the box to collect your Sardinium

A Yellow Balloon can be found southwest of the Boss Kettle. When the game tells Agent 4 to follow the balloon, this means that this balloon is a Sunken Scroll Balloon. The second balloon is close to the small tower. The third and fourth balloons are near the Boss Kettle. The fifth balloon is next to the kettle to the first mission. The sixth balloon is between the second and third mission kettles, but at a high altitude. Climb the wall to reach the balloon. The seventh and last balloon is on the set of platforms adjacent to the wall. Once all seven balloons have been popped on time, the sunken scroll will appear on the set of platforms.

Arriving after defeating the Final Boss:

Trapped in the snow globe: