The Art of Splatoon 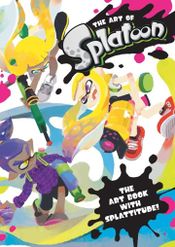 The Art of Splatoon (スプラトゥーン イカすアートブック Supuratūn Ikasu Ātobukku) is a book of official art from Splatoon, released in Japan on 10 October 2015, North America on 11 July 2017, and in Europe on 13 July 2017. It was originally set to come out in both North American and European markets in June.[1] It contains over 300 pages of concept art, character designs, and other topics from the game,[2] with the English version containing an additional 7 pages of Splatoon 2 concept art at the end. The book is published by Kadokawa Dwango and is sold for 2400 yen plus tax.[3] The English version is published by Dark Horse Comics.

After the English release, the artbook went on to receive translations in other languages. In Spring 2018, a Simplified Chinese version of the book, published by Jiuzhou Press, was released as SPLATOON艺术设定集. This is the first piece of Splatoon media to receive a licensed Simplified Chinese translation. The localization for the objects and characters of the game uses a mixture of terms that were already popular among fans along with new names that the translator felt would be more accurate.[4] Later that year, a French edition of the book was released on 28 November 2018 by Soleil Productions. A Spanish edition was released on 21 June 2019 by Norma Editorial. A German edition was released on 29 October 2019 by Carlsen. These versions of the artbook are based on the English edition.[5][6]

The artbook contains several sections focusing on different topics related to the game. The English version of the book has the following sections: