The Experimentorium is the nineteenth mission of Splatoon 2 single player mode Octo Canyon and is the first mission to take multiple routes to proceed into the mission. It is the first and only mission in which the player is requested to use the Hero Blaster.

Climb up the block to the right near the center of the map, and unfurl the Inkfurler on the left. Then take the path with the Bounce Pads. Jump over the uninkable wall with the last one. The kettle is at the end of the platform.

Take the launchpad and break the crates ahead. Behind the crates is a Shielded Octotrooper on a vault in the center of the platform. To the sides are two more of such vaults, and behind it are three launchpads on walls. The player has to take all three launchpads to three different sections in whichever order they desire. At the end of each section is a key, a checkpoint to save progress, and a launchpad back to this area. Upon completing a path the respective wall with the respective launchpad lowers to indicate completion. The player must gather all three keys to activate all three Splat-Switches. Doing so raises the block with the middle Splat-Switch to reveal a launchpad on its back side to the final checkpoint.

Taking the left launchpad in the beginning area takes the player here. Ahead is a weird structure with curvy narrow paths branching from a central block. The player has to climb up to that block and hit the Splat-Switch ahead, causing the branches to the side to rotate, forming an upwards path to the right which the player takes. From there the player is introduced to a circular loop platform with a block in the center. The player has to get on the block and hit the Tentakook running on the loop. Upon defeating the Tentakook, the block rises to introduce two blocks above, both can be hit by the player's weapon but not the player themselves. The right one does not have anything interactable, while the left one has a Splat-Switch on its side. Hitting it will cause the structure ahead to rotate, allowing access when the movement is complete. The next checkpoint is on the structure.

Ahead are three Octocopters above another circular loop platform with two blocks suspended on inner opposite sides. Defeating them will cause the further block to rise and move towards the closer block, revealing a Splat-Switch on its back side. Hitting it will cause the aforementioned block to the right to rotate, revealing a Splat-Switch on its back side. The player must go back and hit it, causing the structure behind it to deform and assemble into a curvy path upwards. From there the player has to go along the path, defeating Rocket Octocopters on the way. At the top is a checkpoint, a key, and a launchpad back at the beginning area.

Pick up the key and take the launchpad to return to the beginning area.

Taking the middle launchpad in the beginning area takes the player here. Ahead are two Grapplinks lined up such that the next one is behind and lower than the previous one. The player must hit the Grapplinks successively before they fall too far to reach the next Grapplink. If the player succeeds in making it to the end of the Grapplink path they fall onto a platform with a launchpad to the next checkpoint, and if they fail they fall on another platform with a launchpad back to the beginning of the section.

Drop down to pick up the key, then cross the gap, collect the Scroll if the Splat-Switch has been hit (see Collectibles) and take the launchpad back to the beginning area.

Taking the launchpad to the right in the beginning area takes the player here. Ahead is a platform with two Shielded Octotroopers on a path of Octarian ink circling a platform of the same level in the middle. Defeating them makes the platform in the middle raise, revealing a hole the player can jump down. Below is a path leading up to a platform with four Octotroopers circling a raised block in the middle with a Shielded Octotrooper on top. Defeat the whole lot and the Octostamp behind the bumper ahead. Climb up the block behind the bumper and activate the Splat-Switches to the side. Doing so activates the next checkpoint and reforms the path.

Pick up the key and take the launchpad back to the beginning area.

Location: To the left of the fourth Grapplink in middle path checkpoint 2 is a Splat-Switch suspended in the air. The player has to hit it after hitting the fourth Grapplink. Doing so moves the grate with the Scroll on top to the gap in middle path checkpoint 3. After activating the Splat-Switch the player has to take the launchpad below and redo the section. 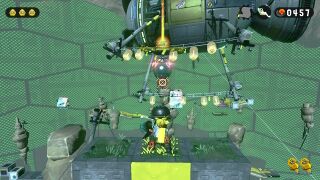 Scroll location before activating the Splat-Switch 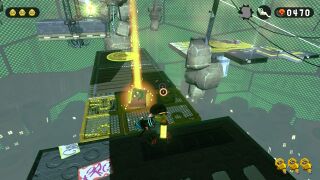 Scroll location after activating the Splat-Switch 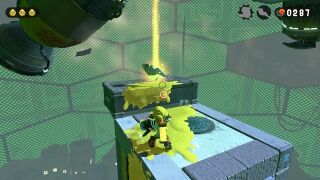 The Experimentorium has 3 pieces of armor to collect.

Armor 1 Location: In the lone crate on the left side of the loop in left path checkpoint 2.

Armor 2 Location: In the crate on the block to the right of the platform with a hole in right path checkpoint 1.

Armor 3 Location: In the crate on top of the Industrial Squee-G docked in front of the final checkpoint.

Location: Take the launchpad on the block in the middle of the area in the final checkpoint to the detour area with Flooders. Navigate through the Flooders across the block to the large block on the other side. Climb up on it and get on a Flooder. From there navigate across the Flooders to the large block on the left. On top is a lone crate with the ticket. From there the player can take the curved plank walk to the launchpad back. 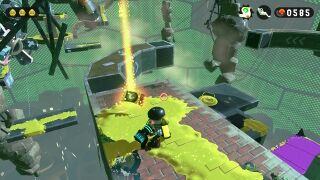