For the Boss Salmonid, see Griller.

The Griller, also known as Griller, is a Known Occurrence in Salmon Run.

During this event, the only Lesser Salmonid that spawns is the Smallfry. Smallfry spawn in small groups, while Grillers show up one at a time. Later in the wave, multiple Grillers may appear at a time. 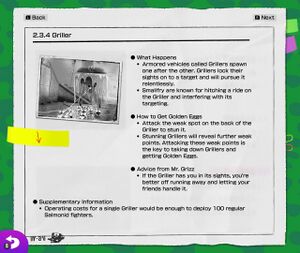