The Octopark
˜ Stay On Your Grind ˜​

The Octopark
˜ Stay On Your Grind ˜ Shoot at the Ride Rail to make it form a rail across the pool of purple ink. Then, go up the slope and head to the next checkpoint - the second and third sets of the Ride Rail are optional to ride on.

Shoot at the empty Ride Rail to form a path to ride upward. Keep attempting these to head to the next checkpoint about two more times. There are a couple of Octotroopers, but it is optional to splat them.

Shoot at the empty Ride Rail and it will form a curvy path. You will meet an Octocopter along the way but will not become too much of a bother. After the Ride Rail path, there are more empty Ride Rail generators, so shoot the one closest to you. It is optional to break the large crates, so just be sure to jump while at the end of the rail ride.

On the other side of the large crates is an Octotrooper which is optional to splat. Shoot another empty Ride Rail and it will take you to the next Checkpoint.

There are two empty Ride Rails, but if one gets shot, both of them will form a path at the same time. There are Power Eggs and squid rings to go through along the Ride Rail paths.

There is another empty Ride Rail here, and shooting it will create a long path. To have more fun at this Checkpoint, it is optional to go through the squid rings. Along this Ride Rail path there is only one Octocopter, but if it is not splatted, it can follow you to the next checkpoint.

There is another Ride Rail to get on at the ending of this passage that will take you to the next Checkpoint.

Shoot at the empty ride rail. It will form a path, but there are other Ride Rail paths that are already activated. It is optional to side hop to the other sets of Ride Rails. The end of the Ride Rails will take you to the final checkpoint.

Activating the Ride Rail will form a long and curvy path that leads underneath the next area. Once upon reaching your destination, turn left to find another empty Ride Rail. Activate the Ride Rail to get on the center tower of the area. When you are traveling to the top, defeat the Octotrooper sitting on the center area to reveal the launchpad. Use the launchpad to take you to the Zapfish. Before the Zapfish, you will land on a Ride rail with a wavy path. Once off of the Ride Rail, destroy the shield and grab the Zapfish. 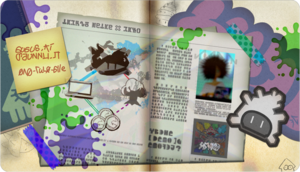 Location: At the Final Checkpoint, while on the second Ride Rail, squid rings spawn facing a large crate. Jump off of the Ride Rail through the squid rings and break the large crate to find the Scroll. 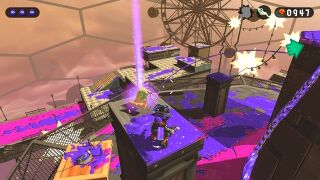 Location: When on the fifth set of Ride Rails, hop on the leftmost rail. Jump to the ledge with the crate which contains the Sardinium. 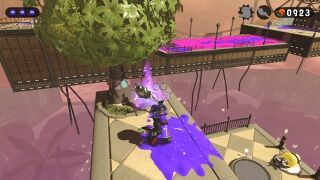 Location: On the third checkpoint, when approaching the end of the dual Ride Rails, stay on the left side and make sure to jump off the rail at the right time. Break the small crate that holds the Crust Bucket Ticket. 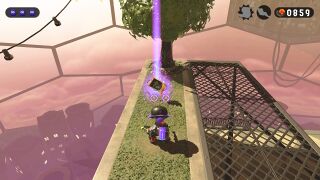