The professor posing for a picture with Judd

The professor is a minor character in Splatoon and Splatoon 2. They were a human, and was both Judd's original owner and the creator of the AI Tartar. Not much is known about the professor, other than the fact that he was rather intelligent, and that he loved his cat. 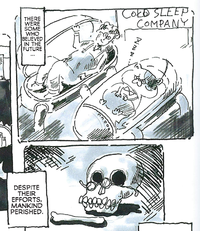 In Splatoon, two Sunken Scrolls have writings set from a concerned pet owner. Worrying about the lack of action being taken by "the policy makers" in regards to the Earth's rising sea levels and the wellbeing of Judd, the Professor had him cryogenically frozen for 10,000 years. In Splatoon 2, another Sunken Scroll reveals that the machine Judd was enclosed in can produce clones of himself. The pet owner appears to be remorseful over the process of preserving Judd and ensuring he has company when he wakes up.

In the Octo Expansion, Commander Tartar states that it was created by a "brilliant professor" to pass down humanity's knowledge to the next "worthy" lifeform in hopes of rebuilding civilization after the extinction event.

In a Famitsu interview with the game staff, director Yusuke Amano confirmed that the pet owner and the professor were the same person and that the professor's intent in programming Tartar was for the next intelligent lifeform to not repeat the mistakes of the human race. However, Tartar's loneliness caused its programming to disregard its creator's original intentions as time went on.[1]